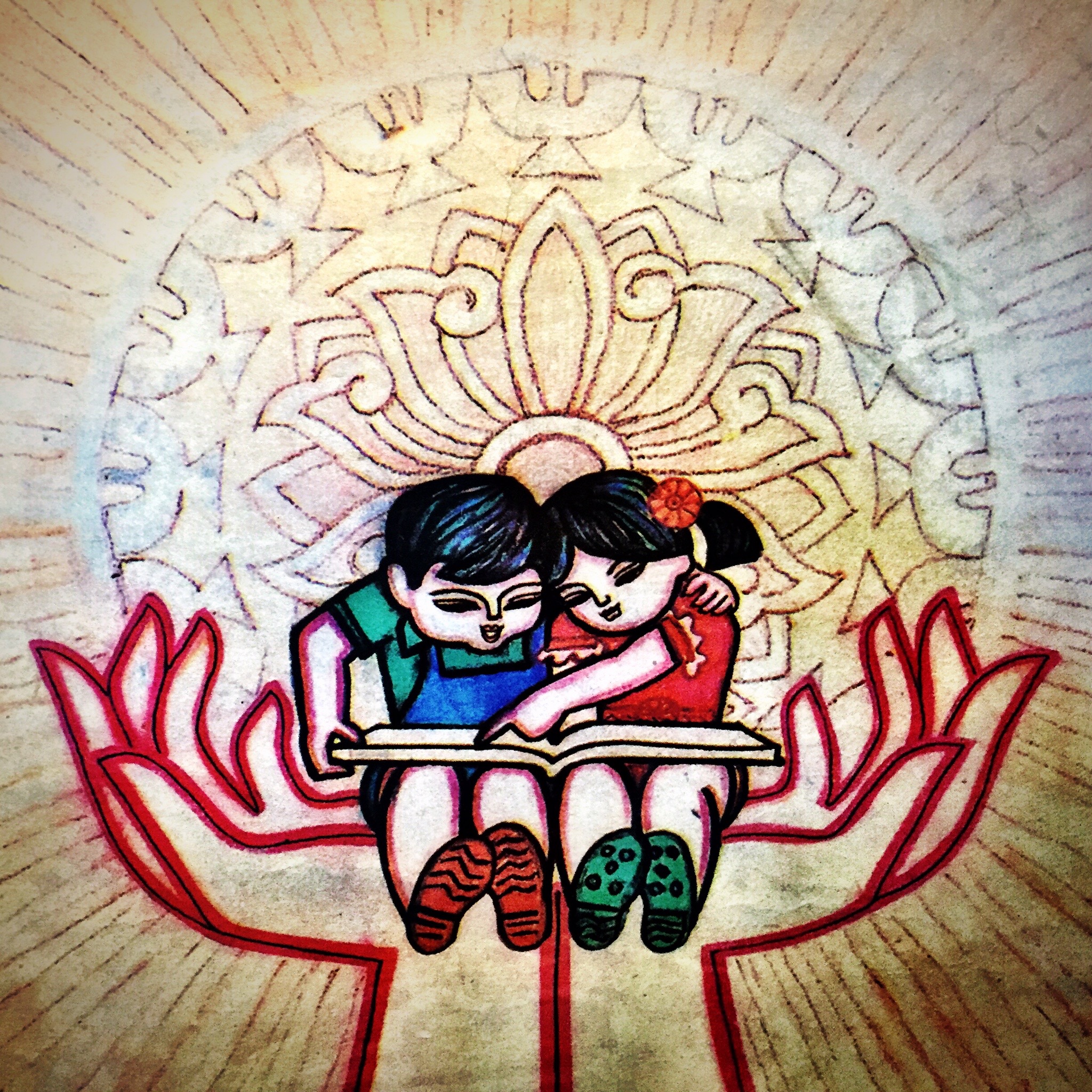 In our culture, school has become almost entirely synonymous with education. It’s difficult to argue against education being a positive thing, ergo school must be a good thing too, right?

For a long time I certainly thought so. I did not enjoy my experience of school much, but it never crossed my mind that it wasn’t essential. In my adult life I became involved in teaching in various contexts, from running drama workshops to coaching trampolining, but it was schools I was ultimately drawn to.

As an English teacher, I had a very clear vision of what I believed school offered the kids I taught. It was a place for them to find their voice, to learn about all sorts of things they might not otherwise be exposed to – from classic literature to current affairs. It was a safe place, where they could try out different roles and test out different theories about the world and how it worked. A place where they could mix with people from different backgrounds and cultures and discover that ultimately there is much more that we have in common than that which divides us. I worked hard to inspire them, to find the spark which would set them on their own path of self-discovery and to help them overcome the challenges their teenage years threw up along the way.

It was hard, sometimes, to hang onto that vision – particularly when the need to focus on jumping through exam-shaped hoops got in the way – but I was still convinced that I was achieving what I had set out to do. Now, as a parent looking in on the education system from the outside, I am not so sure.

The bulk of my teaching career was spent under a Labour government. One which valued teachers, and gave us an increasing amount of autonomy. Social and Emotional Aspects of Learning were embedded in the curriculum. We focused energy on learning how to learn, and how to develop thinking skills. There was a big emphasis on cross-curricular approaches – developing themes across different subject areas to help learning become more meaningful. I rediscovered my own love of learning – immersing myself in education research as I progressed to leadership and studied for a Masters degree – and everything I learnt was ploughed back into my practice, a process as creative for me as I hoped it was for the young minds in my charge. We regularly worked with outside bodies in the arts and the media to enrich students’ experiences, genuinely exposing them to opportunities which they would have had trouble accessing if it were not for the links we were able to forge.

For me this is what school was all about. Seven years of Tory rule though has made it seem nothing but a blip.

Now, the relentless improvement in standards is being driven not by any attempt to engender a love of learning, but rather by raising the bar ever higher as if this in itself will magically instil superior levels of knowledge in our children. It is knowledge that the focus is now on above all else – it’s much easier to assess, and easier to control exactly what is being taught, and how. In my subject area, complex grammar is the most obvious permutation of this, with not yet eleven year olds (and even not yet seven year olds) being examined on grammatical rules of questionable veracity and even more questionable relevance.

Creativity is being squeezed out of the curriculum at every available angle, and the ‘progressive’ teaching methods I loved which were rooted in so many years of research are being ousted by more ‘traditional’ methods that are often easier to deliver but have time and again been proven to offer little beyond the short-term skill to be able to regurgitate knowledge for exams.

And impact is this having on our children? A surge in mental health issues, young people (and their teachers) drowning beneath waves of exhaustion and anxiety. A generation suffering from a lack of time spent outdoors, pulled out of the natural rhythms of play way before their personalities are fully formed to become compliant automatons in an increasingly impersonal system.

In trying to make sense of what the point of it all is, I keep coming back to the history of schools in our society: from church-led organisations intended to indoctrinate young minds in the religions of christianity and capitalism to state funded institutions designed to shape useful citizens and maintain public order. And from that history of indoctrination and control emerges a dystopian vision of the ambitions the powers that be have for schools today.

It has nothing to do with helping our children reach their potential, with engendering in them a sense of self-worth and the creativity to face new challenges head on, forging a future for themselves which redresses the imbalances of a fractured society. Instead it is about maintaining the status quo, about creating a compliant workforce who will not rock the boat and about ensuring the survival of the elite.

I find it particularly interesting that private schools, for so long the bastion of traditional methods and heralded by the frontrunners of this latest overhaul of state education, seem themselves to be shifting in another direction entirely – they are championing emotional literacy, giving students a grounding in the soft skills needed for success in life rather than a narrow and relentless focus on exams. Private schools are also championing the arts, at a time when they are being increasingly sidelined in the state sector.

This is not a u-turn on my opinions on private schools – I still believe society would be better off without them – but when our current government holds these schools up as the pinnacle of good practice, claiming to emulate them whilst at the same time stripping state schools to the bone and failing to acknowledge the shift in the direction of travel then surely this undermines their supposed intentions with state education even more?

The reality is that a generation of young people from all but the most privileged 7% is being subjected to a new wave of sausage factories – reductive, coercive, anxiety-inducing, spirit-crushing with the inevitable result of suppressing the growth and development of the wonderful people that they are.

So what are we to do about it?

An increasing number of parents are taking their children out of school altogether, but this isn’t for everybody. The function of school as childcare cannot be ignored completely, and few families have the privilege of pursuing home education as an option – or in fact want to give up their careers in order to facilitate it. There is a danger too of children missing out on the learning community that schools have the potential to provide, of being separated from society rather than immersed within it.

For lots of parents I’ve spoken to, this social aspect of school ultimately overrides their other concerns – just being with other kids, whatever the details of what happens during the school day, becomes the purpose of being at school. They are confident that everything else can be compensated for by their parenting – shaky self-esteem can be restored, opportunities for creativity can be provided out of school hours, the message that exam grades are more important that anything else can be contradicted.

I’m not convinced by this. It seems crazy for such a huge chunk of childhood to be given over to endeavours that hover all too frequently between being pointless or damaging, even crazier for such a dissonance to exist during these formative years between the values a family holds and the ones their child lives day in day out.

Of course that is one of the other arguments I hear a lot about why school is so important: it sets kids up to understand that life is full of compromises and disappointments, that ultimately in order to succeed they will have to sacrifice the truth they hold in their hearts to fit in with society.

I may be an idealist, but I think our kids deserve better than that.

What we cannot do is just roll over and accept that there is no other way. As parents, and as advocates for our children, we hold more power than anybody else in society to affect change in our schools: it is up to us to use it.

2 thoughts on “What is school for?”