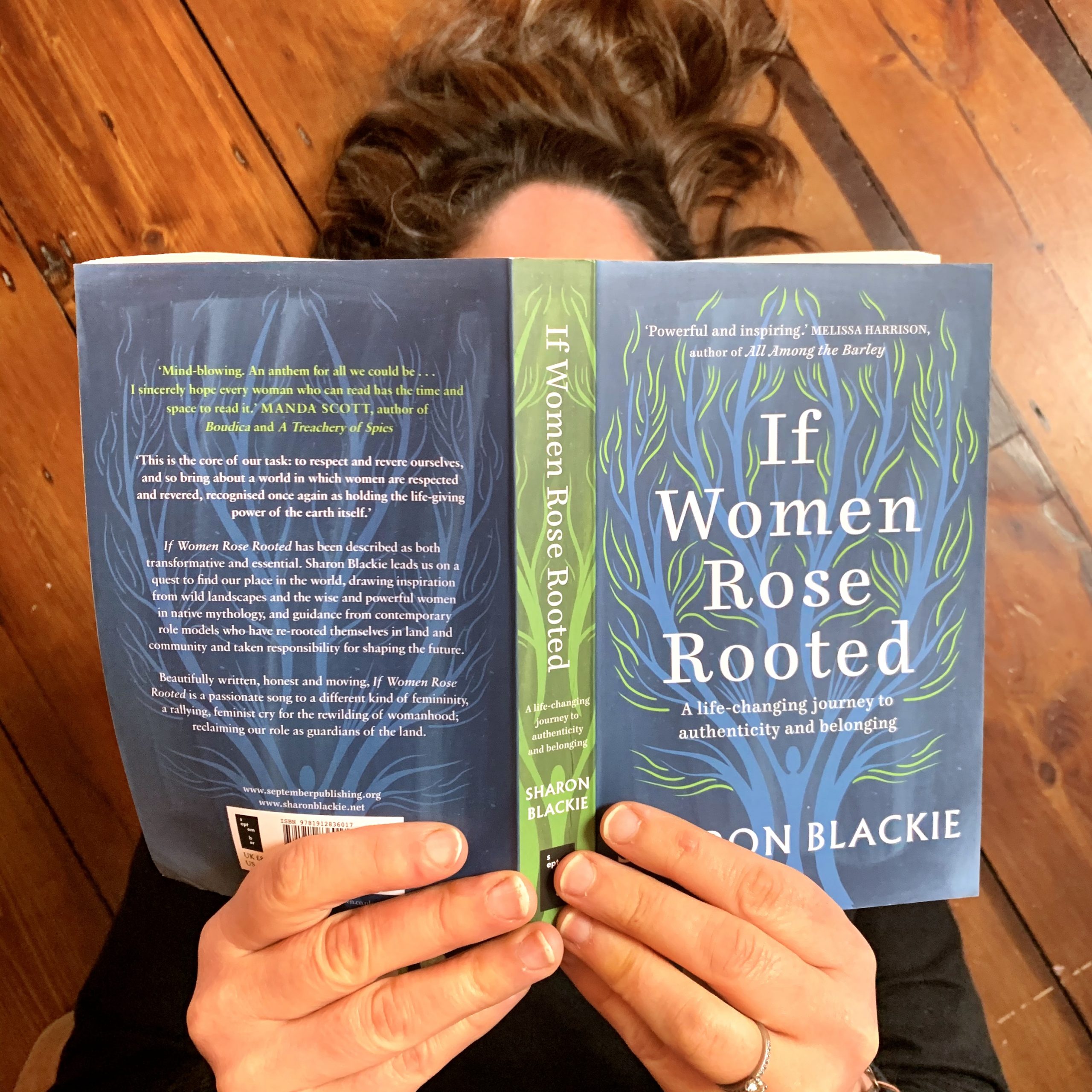 I have read* some incredible books in the past year. Really inspiring, game-changing books. As well as being hugely motivating as I get words on the page for my own changemaking book it has helped me simply keep going in a time when society and the planet seem to be in free fall. These books have shifted my sense of what’s possible, and started to rewrite the narrative I live my life by.

So I thought it was about time I shared some of them here.

*I should clarify that most of these books I have actually listened to rather than read. but that still counts, right?

Out of the Wreckage by George Monbiot

Monbiot’s message really resonated with me at a time when I was beginning to despair entirely at UK politics. He presents a convincing argument for how neoliberalism has led us to a place of such division and disenchantment, explaining the impossibility of truly tackling the climate crisis or finding personal contentment whilst we are caught up in its dependence on competition and never-ending growth.

The problem is that the story at the heart of neoliberalism is a convincing one, one which still has many people under its spell. There have been glimpses of an alternative narrative on the left but nothing yet that has sufficient cohesion or conviction – something that is just as true now (possibly more so) as it was when this book was published in 2017.

What we need, Monbiot argues, is to focus on building communities, on fostering a sense of belonging, and on counteracting the isolation, loneliness and fear so many experience. By doing so we have the potential to unleash the altruistic and compassionate values that we need to build a fairer world.

On a national scale I am a little less optimistic than I was when I first read this book that we are anywhere near achieving this goal. However as with so much of the thinking I find myself engaging with today there is nothing to be lost by striving towards it – and potentially even in the short term a whole lot that we can gain.

As I listened to the late Marshall Rosenberg narrate his seminal text I realised that nonviolent communication has been at the heart of what I have been aiming to achieve, both personally and professionally, for as long as I can remember: the pursuit of human exchanges that were grounded in the desire to understand and grow rather than judge and criticise was central to my work as a teacher of teenagers, and has been invaluable as a parent.

To have it named, and explained so clearly and concisely with a wealth of enriching examples, from domestic arguments to international peacekeeping, was really empowering for me.

It reinforced my conviction that it is in the smallest of our interactions with others that we can really begin to lay the foundations of change, and to nurture that sense of being safe and understood that is at the crux of human happiness. So many conversations descend into conflict as a result of the explosive combination of defensiveness and blame we preload ourselves with – and never is that more true than when those conversations are rooted in fundamental issues around politics and identity.

Learning to speak our own truth compassionately and truly value the perspectives of others is the only real way forward as we seek to find solutions to the problems of our time.

Speaking of seeking solutions, one of my biggest revelations last year was the discovery of permaculture. It hadn’t been entirely off my radar, but I had seriously underestimated both its accessibility and potential – I’d seen it as a niche gardening approach whereas in fact it is a whole system for living which could genuinely offer the blueprint for change we need to build a better future.

My way into this realisation was this wonderful book about a farm in France created on permaculture principles by two non-farmers. It follows the literal journey taken by Charles Herve-Gruyer as he travelled the world exploring indigenous cultures, and his growing realisation that the large-scale homogenous farms of the West were not only missing a trick in terms of productivity but destroying the natural world in the process.

On a patch of land in Normandy he and Perrine began experimenting with a range of different approaches which worked sympathetically with the land, employing traditional techniques alongside ones which were emerging from contemporary research.

The results are hugely inspiring to me with my aspirations towards self-sufficiency, and even more so in terms of how their research could be used to transform the approach communities take towards food production.

Alongside permaculture, something else that kept cropping up for me last year was the work of Joanna Macy: a deep ecologist who has devoted her life to environmental activism, underpinned by buddhism and systems theory.

The concept of hers that first grabbed me was that of the Great Turning, something she describes as ‘the essential adventure of our time’. It is one of three stories of our time that she identifies, lenses through which we can see reality and make our choices about how to act.

The first is Business as Usual, within which economic growth is essential for prosperity and there is little need to change the way we live. The second, the Great Unraveling focuses on the disasters that our world has and continues to face as a result of Business as Usual, and holds that our descent towards catastrophe is unavoidable.

The third – and the one I have been overwhelmingly inspired by – is the Great Turning: the notion that whilst we might be on a path to destruction this in fact is a huge opportunity for us to rise to and find a new way forward, one which heals us as we heal our world.

This book compellingly sets out these stories, and begins to explore how we can make the most of this opportunity if we choose to do so. For me it was a real beacon in the darkness of these times, and has in turn shone a light on all the wonderful work that is already happening my community and the things that I can do to contribute to turning our fortunes around.

The recommendation for this book came out of conversations around the damaging nature of the patriarchy and the need to find an alternative way forward, and like so much of what I read last year it really opened my mind to the fullness of our potential as individuals in the world – a potential which is severely curtailed by the systems we currently live within.

Blackie’s focus is again on the stories we tell ourselves, and the tremendous power those stories have to shift our world view. Her approach is deeply immersed in Celtic myths, their magic and metaphors, and speaks of our growing disconnection from the natural world as we seek to survive in our pursuit of the capitalist dream.

As I was reading this book I found myself wanting to buy a copy for every women I know: Blackie’s experiences, and her telling of them, are deeply personal, but their resonance will find echoes in so many quarters I think. For me it helped untangle my own thoughts around the journey I am on from career-driven city-dweller to earth-loving dream-chaser. It also really grounded the inklings I have felt about how essential it is for us as a society to re-centre the particular power of women if we are to find a way out of this environmental crisis with humanity intact.

I am in the midst of another of Blackie’s books now, The Enchanted Path, and I might just love it even more than this one. I’ll let you know when I’m done.

Parenting for a Peaceful World by Robin Grille

An admission to make first: this book was not actually part of last year’s reading pile: it was one I first picked up (and devoured) in the heady first few months postpartum when I was seeking a sense of meaning in my new role as mother. But this book has been so powerful to me, and I have referred to it so often both in conversation and in my own internal ramblings, that it definitely deserves a place here.

Grille’s premise is that the way we raise our children is of enormous consequence to the evolution of society as a whole, and that by mindfully seeking solutions to our parenting challenges we have the potential – and the power – to build a better world.

It is a big claim – on one level almost a truism, but on another elevating the role of parents way beyond the status they are currently accorded. Grille approaches it through a meticulous analysis of approaches to child rearing through history and across the world. Whilst that might sound impenetrably heavy, the narrative he weaves is both compelling and mind-blowing, and has hugely influenced my direction of travel in the years that have followed. It has validated my fascination with and commitment to the role of mother, and has also helped me see the lines of continuity that link me now with the passionate and progressive inner-city teacher I once was.

We have a long way to go before we recognise those involved in bringing up children – and indeed children themselves – as the game changers they are: if you are in any doubt as to why it is so important that we make that shift then I urge you to read this book.

And now back to writing, and trying to resist the pull of the pile of books sat patiently waiting to be read… I’d love to hear about the books that have inspired you so I can add them to the list!