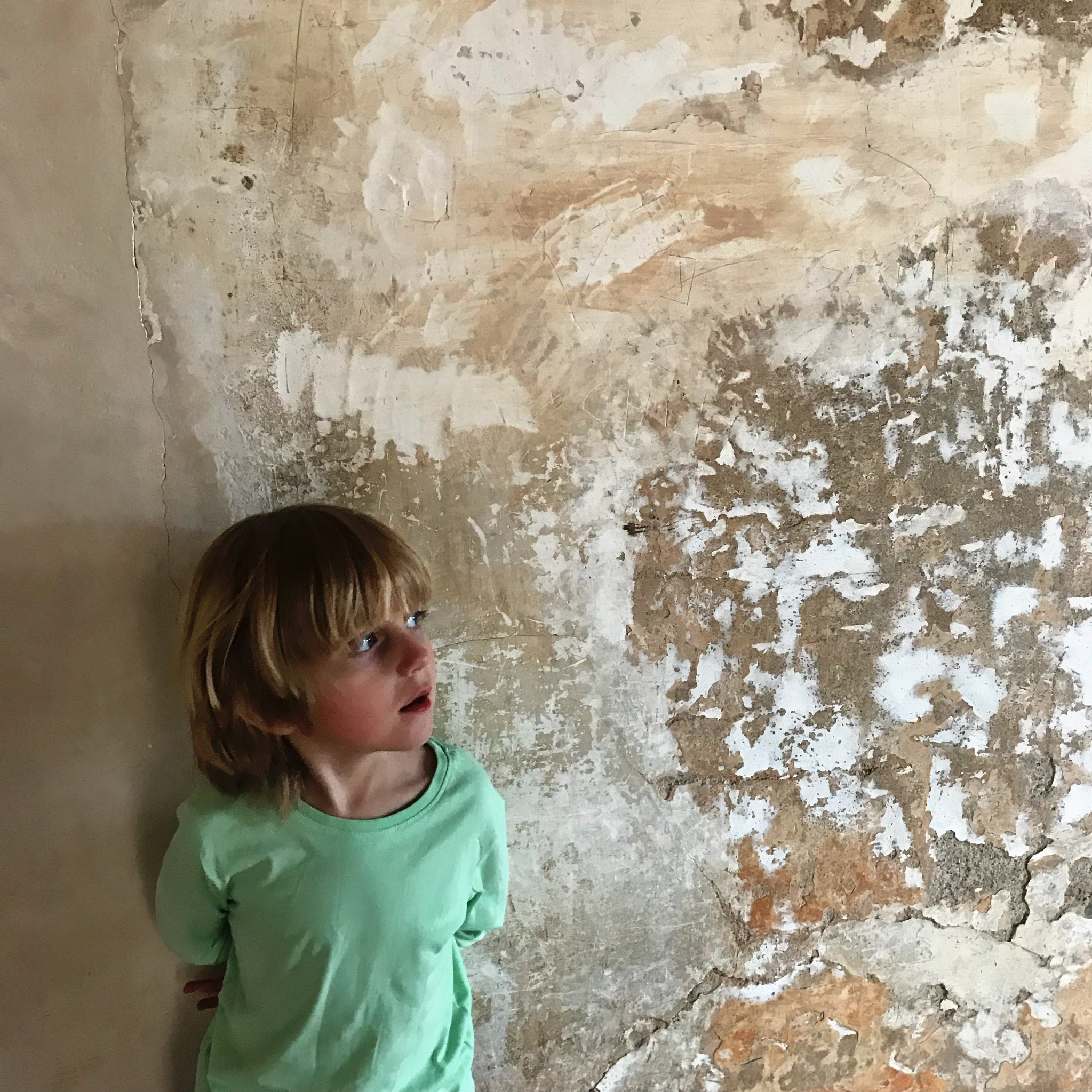 We have had so many adventures since I posted last (pop over to Instagram for pics!), but there is one I need to focus on on…

I have wanted to visit the Alhambra for over twenty years, so when it became clear that our route was going to take us close to Granada I knew I had to make it happen. It was marked on our map back in January, the purchase of tickets added to our to do list. I remembered that little detail when we were halfway through Portugal, and luckily managed to secure the last few places on a guided tour which cost a small fortune. Normal entry tickets had sold out long before – so first top tip if you’re planning on following in our footsteps is be a lot more organised than me!

As it turned out though the tour was not such a bad investment.

We were seriously doubting it as we waited in the courtyard for our guide. Arthur, having been enthusiastic about our visit before, had decided he now had no interest in going inside and was on the verge of total meltdown. It’s been an interesting balancing act on this trip in general – how to let him be a partner in our planning, not dragging him along to things he doesn’t want to do, and yet still gently encouraging him to push through his reluctance to try new things.

Being so far away from home is still proving difficult for Arthur – particularly as he’s not been well – but each time we test his limits he has risen to the challenge admirably, and this was no exception.

As soon as we stepped inside the first of the palace buildings he was rapt. 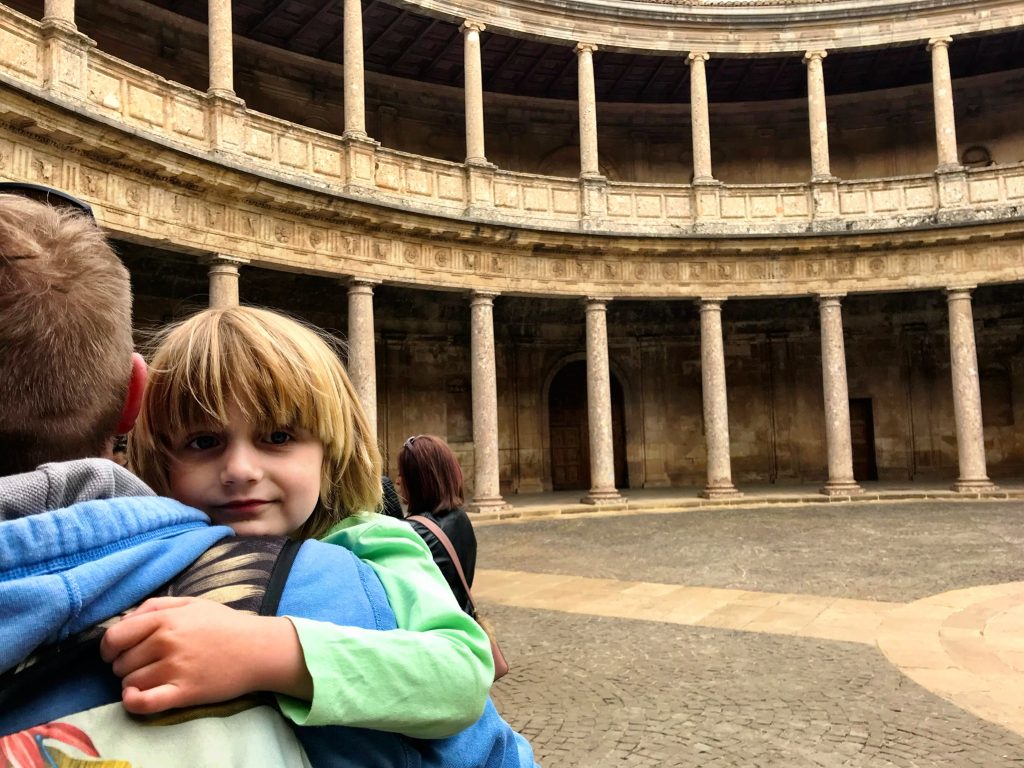 Cuddles helped to ease him in, but he was soon off exploring under his own steam – full of questions and interesting observations about the space, and creating stories for himself and us about the things that might have happened there.

We were all blown away by the views from the Alcazaba, Arthur full of his growing knowledge of castles and their locations high up on hills. It really was quite spectacular, and gave a powerful perspective on the scope of our travels as we looked out past the city to the mountains beyond. 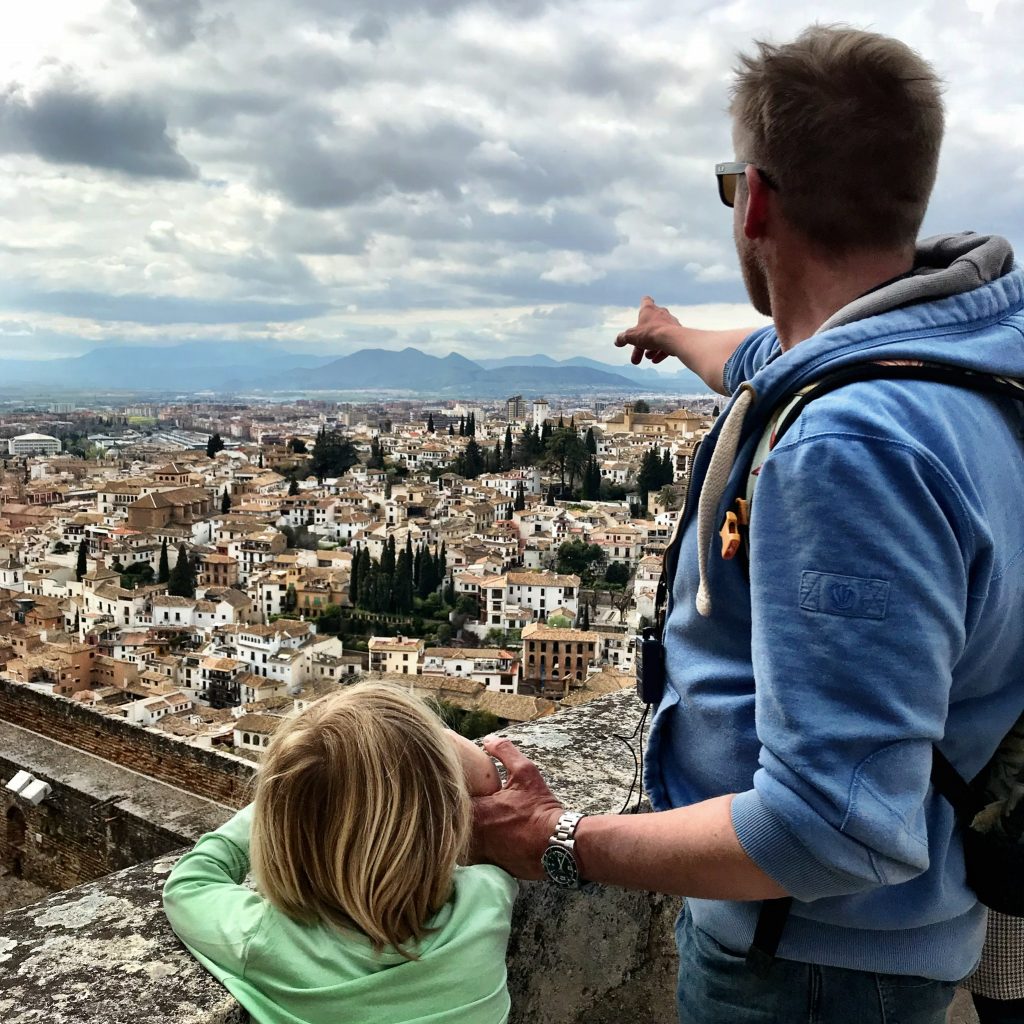 The Nasrid Palaces were the real highlight for me – the spellbinding intricacy of the patterns adorning every surface. I love how it has been so perfectly preserved through the ages, Islamic inscriptions remaining even as the buildings were taken over by Christian inhabitants as they recognised that whilst the language and ideology might be different the message at its core was just the same. 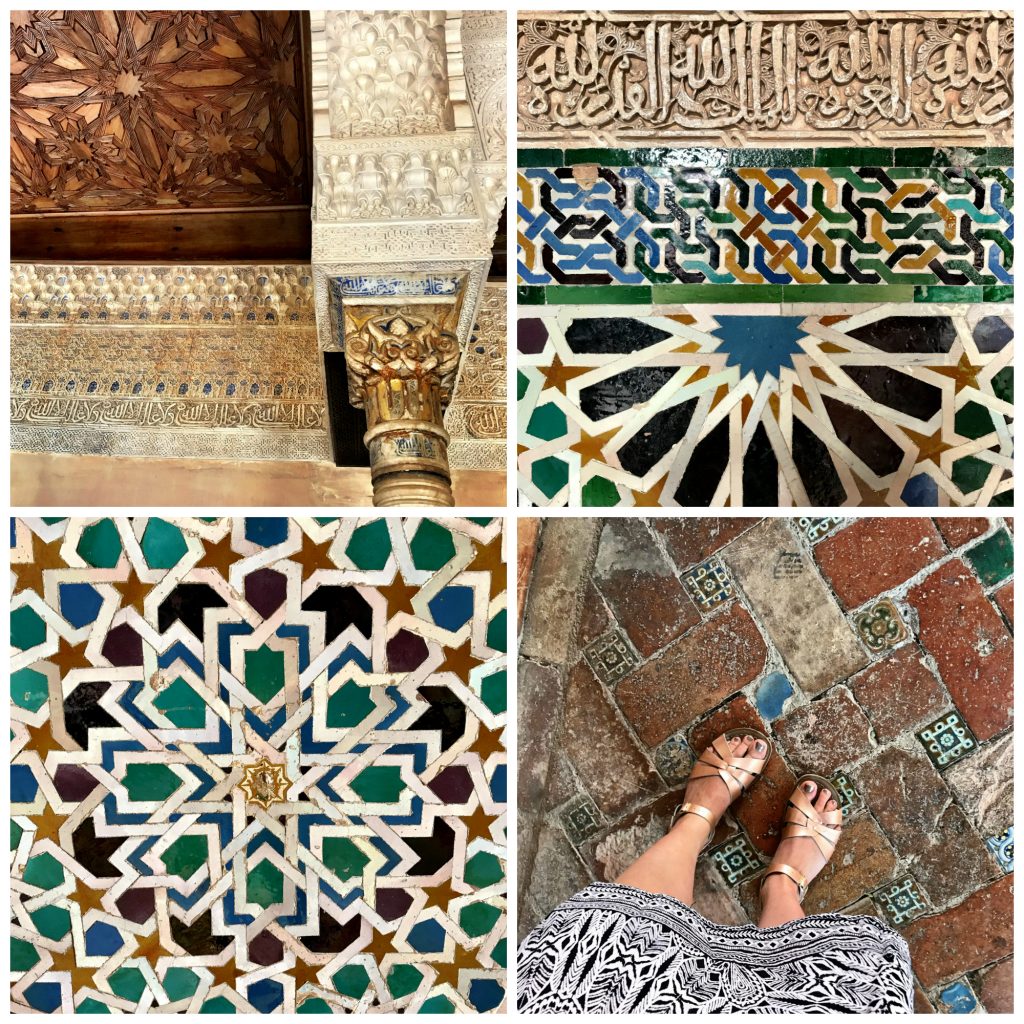 Arthur was less fussed about these details, though his eyes still widened at the overall effect. And he did begin to enter into a dialogue about the architecture as we wandered round, intrigued by how it mimicked natural forms – a ceiling dripping with man-made stalactites, palm-like columns standing tall in a shaded courtyard. 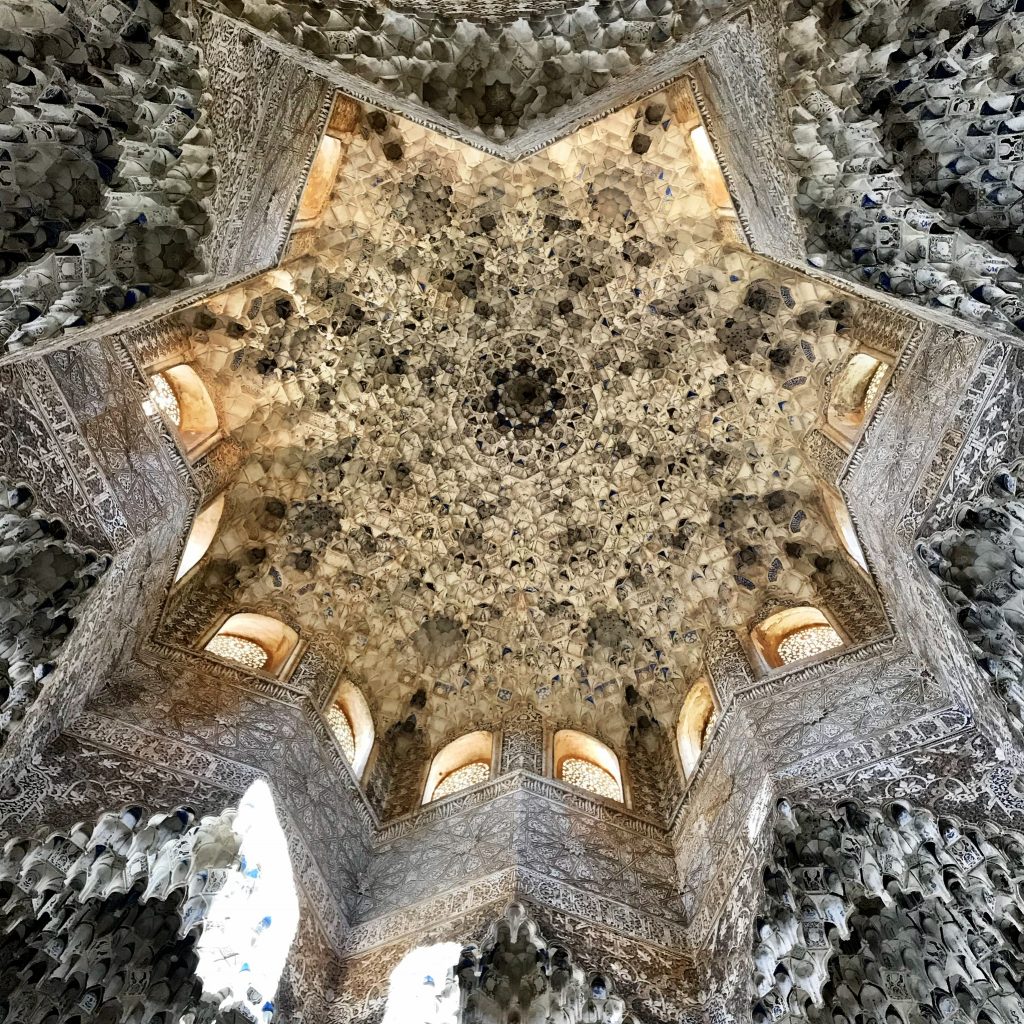 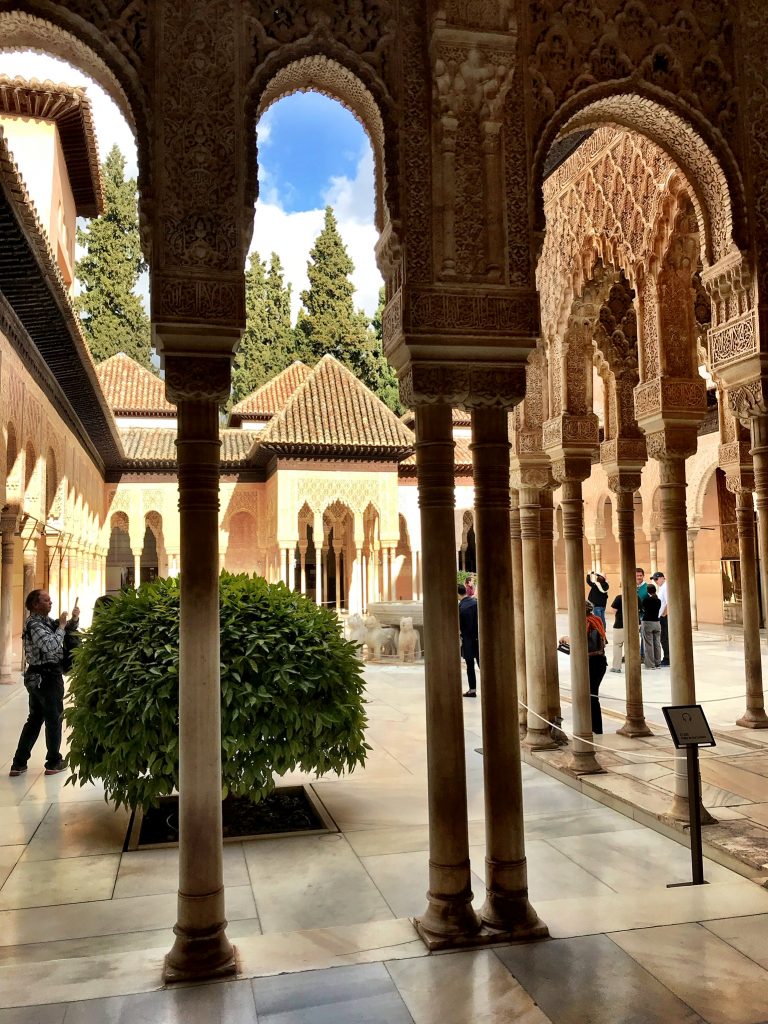 We talked, too, about how the architecture was shaped by the needs of the people who had walked these floors many years before – particularly the need for cool in the heat of the summer sun.

He became fascinated by the way that water wove its way around the site – from pools and fountains to channels carved in marble, not forgetting the modern water fountains at every turn. It was his favourite thing, he said, when we discussed it later. 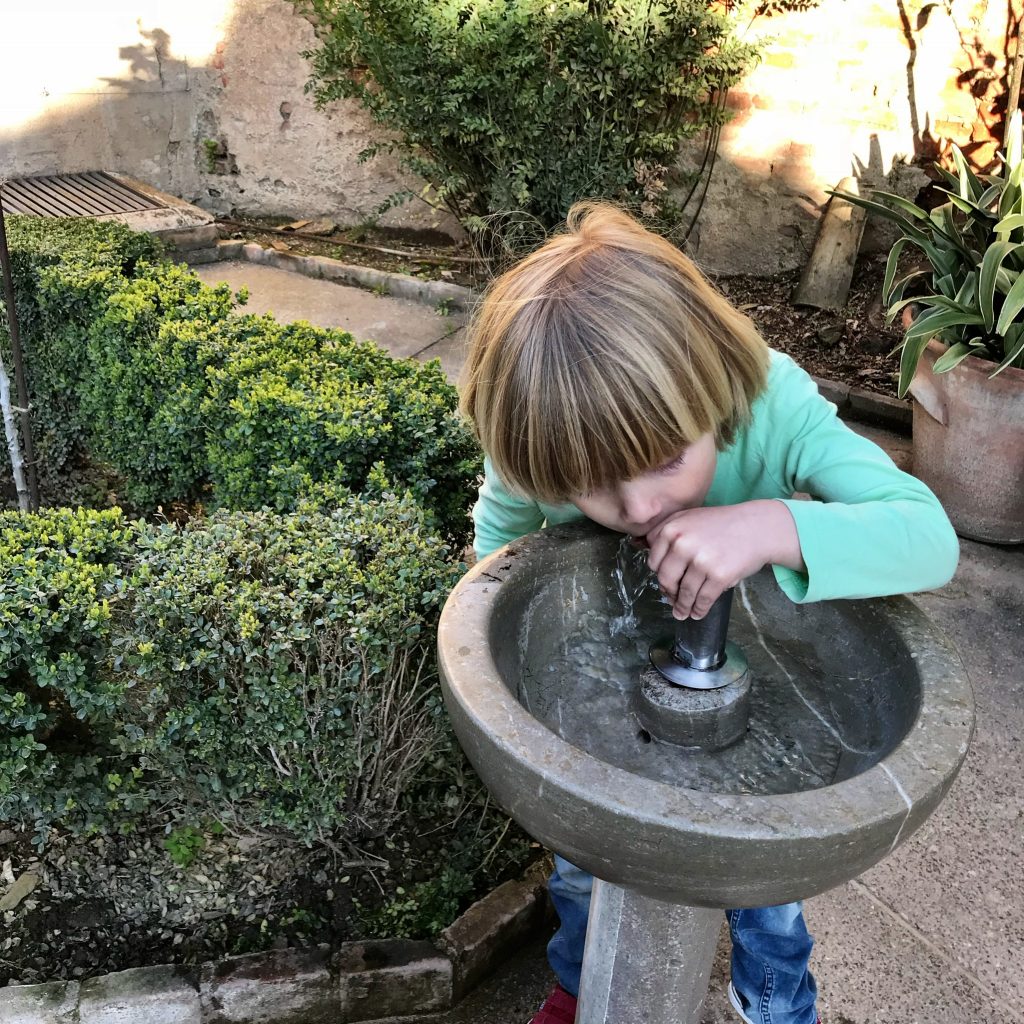 Nowhere was that cooling presence more noticeable than in the summer palace Generalife – the building itself more modest but the gardens (and again the views) quite majestic. 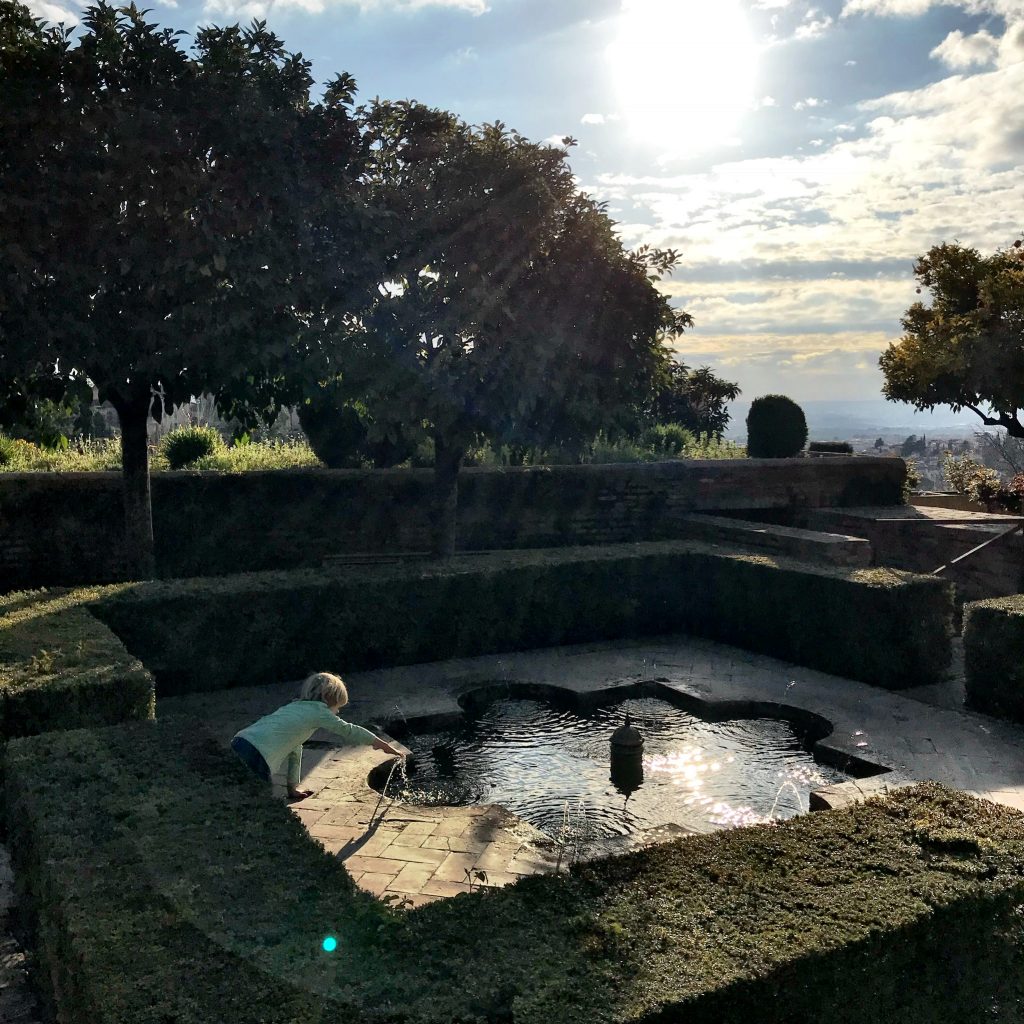 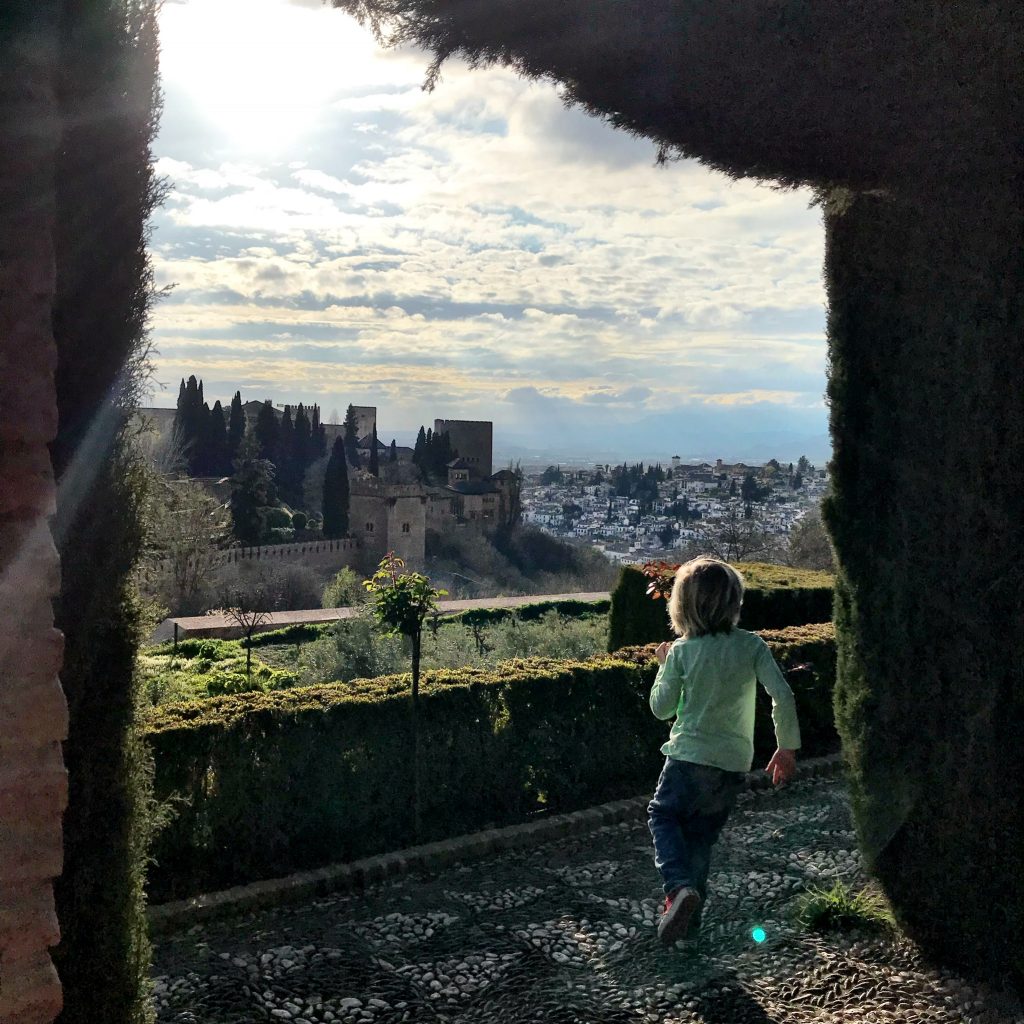 Arthur loved the theatre here – a more recent addition but no less impressive – and was disappointed that we wouldn’t be able to watch a show. One for the bucket list for sure. 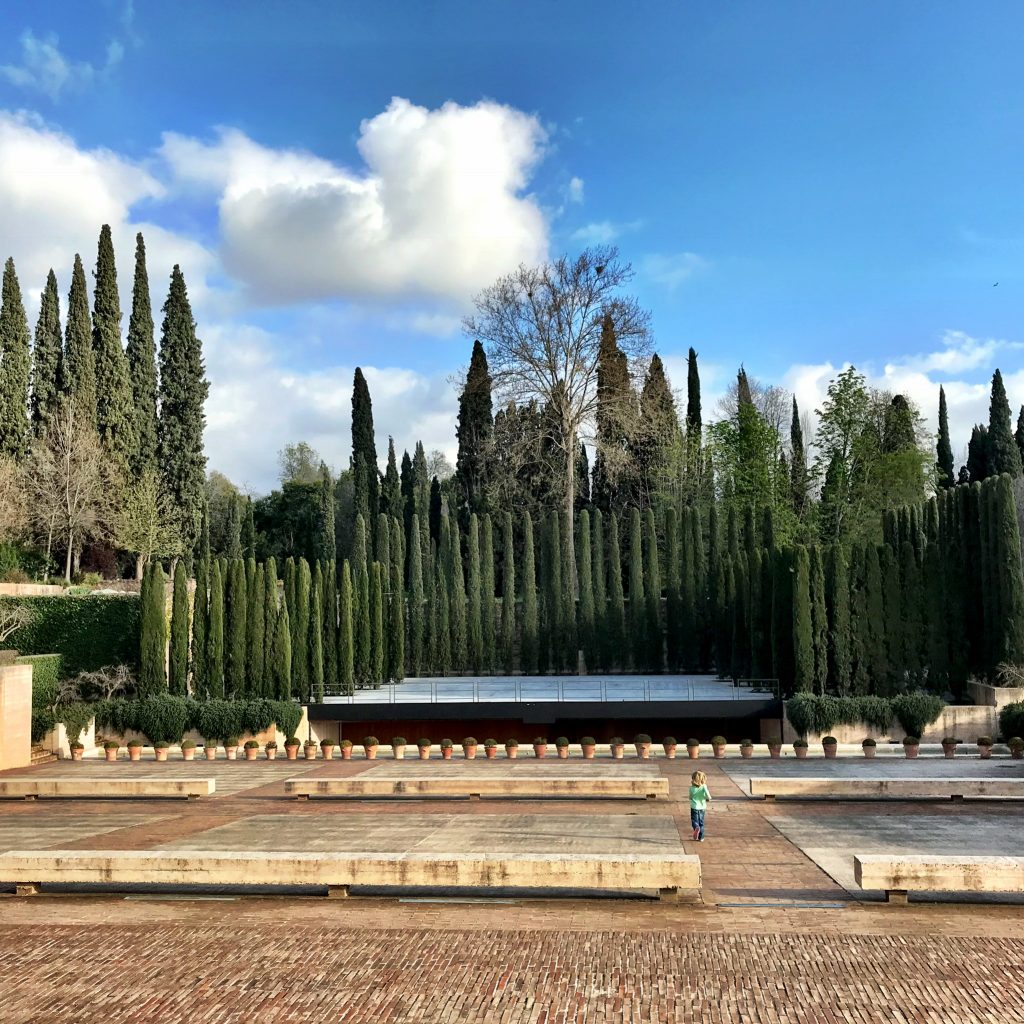 The whole experience was inspiring – we were buzzing when we left, brought closer together by the shared exploration, the mundane stresses of life on the road soothed away by the perfectly orchestrated space. 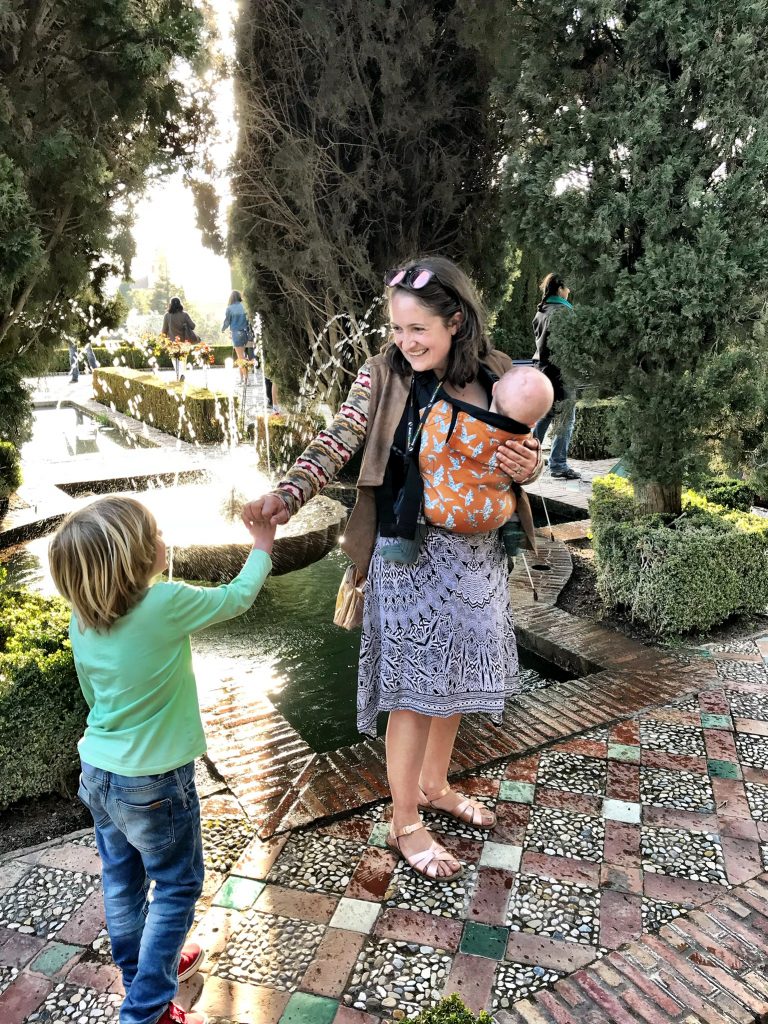 Afterwards we went for tapas in the old town, and pored over the book we’d bought to deepen our understanding of what we’d just experienced. There are so many more layers of learning to delve into. We found a storybook too, Tales of the Alhambra, and Arthur is loving listening to the exotic worlds within it, bringing to life his explorations in a different way. 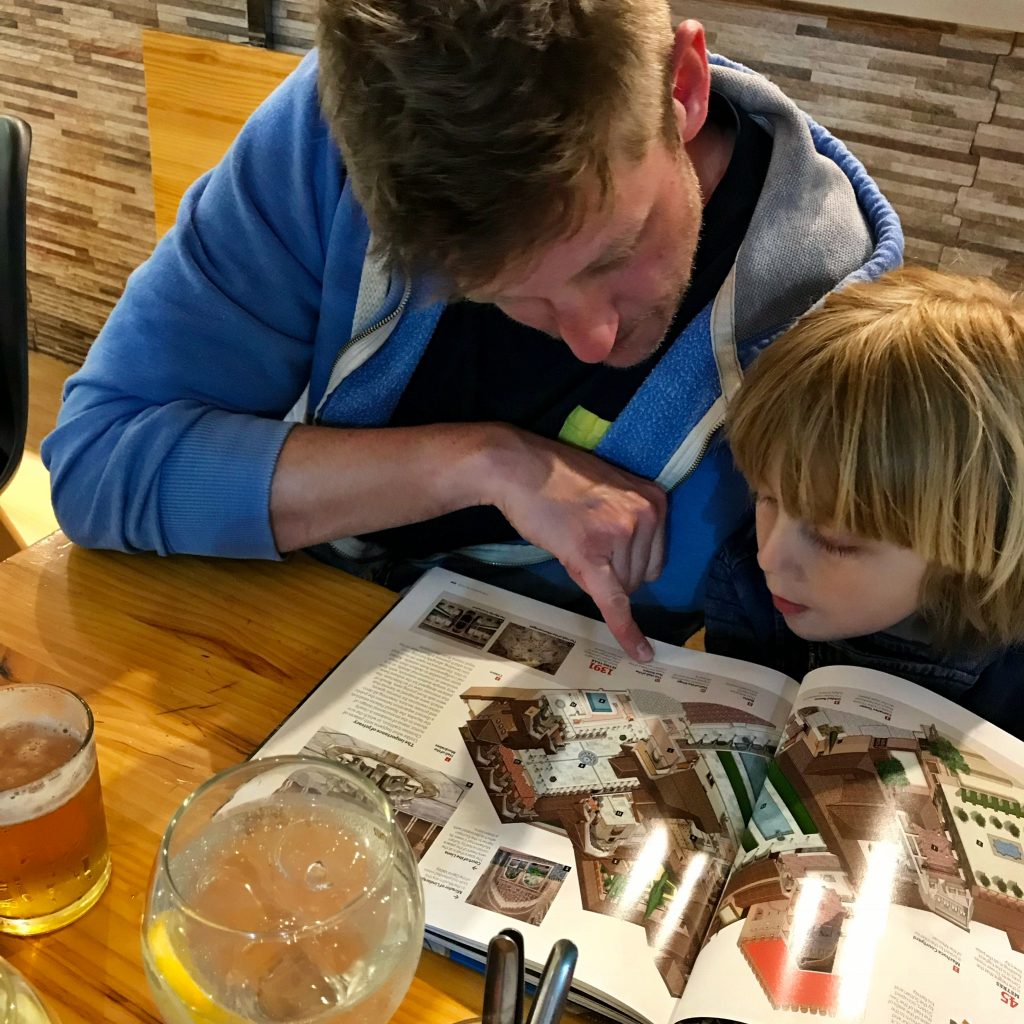 It’s a wonderful reminder of just how much learning can come from exploring the world – our discussions on the day and since have encompassed history, geography, science, art, literature, maths, languages and so much more. And I’m pretty sure it’ll cement itself much more deeply in Arthur’s mind than if he’d been told about it in a classroom.