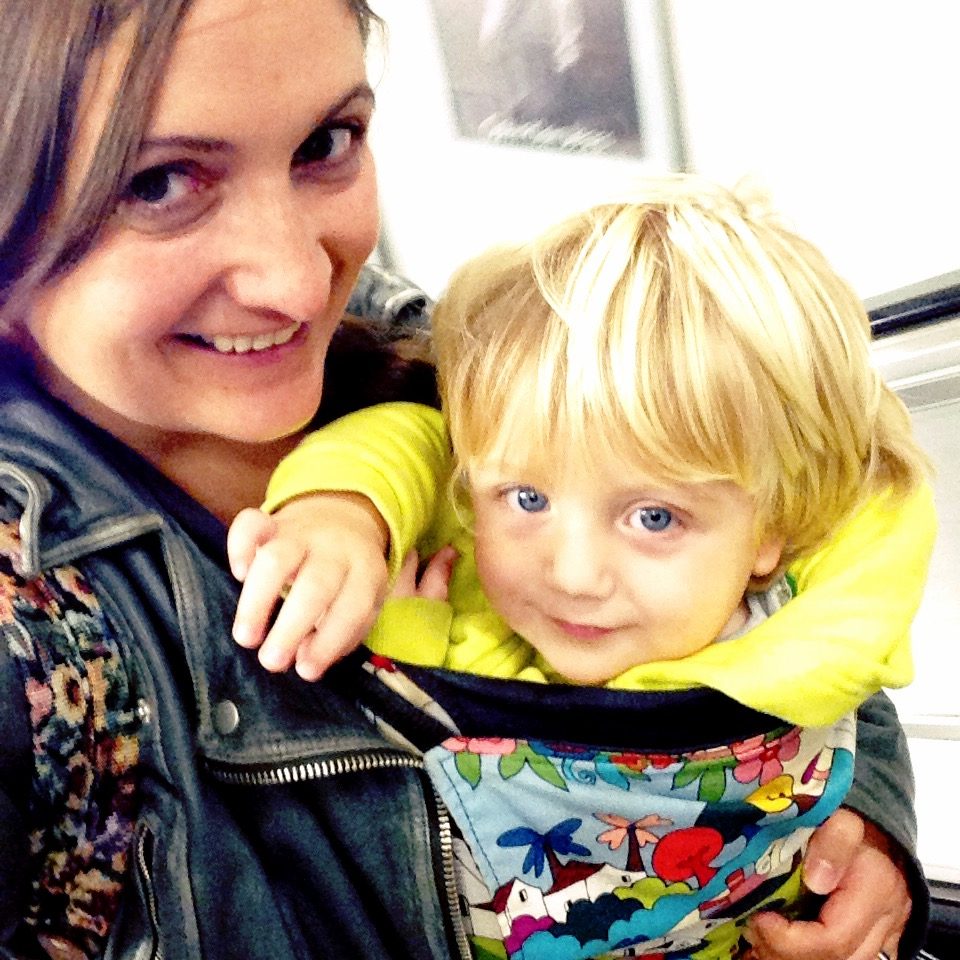 I’ve been meaning to write this post for ages. I got distracted during International Babywearing Week and a few irritating encounters meant I ended up writing about the things not to say to a babywearing mama. But actually my experience of wearing my ever-growing baby is an overwhelmingly positive one, and as Arthur approaches his second birthday that’s what I want to focus on.

So without any further ado, here are the reasons why I absolutely love wearing my toddler:

1) It gives us both some company

I don’t drive, which means that getting anywhere tends to involve lots of walking and often also the bus. This would mean that Arthur would be spending an awful lot of time in a pram, which to me would seem a rather lonely option for both of us!

With Arthur in the sling, he’s up on my level. He sees the things I see, and we can talk about them. When I bump into friends he’s right in the middle of the conversation – not waiting for me to finish whilst he looks at our knees.

I love that he’s included in my world, and that I get to have him there as a little companion. Even with a parent-facing pram I think that closeness would be very hard to achieve.

2) It keeps him safe

Now I’m not saying that prams aren’t safe, but there have been lots of situations when I’ve been glad that Arthur’s up where I can really keep an eye on him.

In crowds for example, especially if there are smokers about. Or in heavy traffic: less of an issue in Devon, but on the London streets I become very conscious that a pram would put him at exhaust level. On our country walks dogs are more often the issue – we’ve had a few close calls when he’s enthusiastically run up to embrace them, but it’s nice to know I can whisk him up if I need to.

I know if he’s too hot or too cold, if he’s frightened or sad. Ultimately there can’t really be anywhere safer for my little boy than cuddled up next to me.

3) It keeps me strong

There is no denying that walking around with a 15kg weight strapped to you feels like a pretty good workout after a couple of hours. My carrier distributes the weight evenly so I very rarely have an aching back, but my core and my legs are definitely working harder.

With wearing a toddler, it becomes even more important to have a well designed carrier. I love my Connecta for it’s combination of support and ease of use, whilst other toddler-wearing friends swear by the more traditional Mei Tais or woven wraps. There are a whole range of slings and carriers designed for toddlers and even pre-schoolers on the market – something I had no idea about before I entered the wonderful world of babywearing, and something well worth investigating if you’re keen to keep on wearing your baby for longer.

4) It makes nap time a breeze

I realise this will be a little controversial for some people, but Arthur has almost all of his naps in the sling. He can sleep elsewhere – but he sleeps longer and deeper if I’m wearing him.

He still has two decent naps a day, and that time is invaluable for me to get writing done – all the more so because I’m forced to stay reasonably still rather than getting on with chores around the house!

And if we’re out and about it means he’ll sleep when he’s tired – no rushing home to get him into his cot. He’s even happy to begin his night’s sleep on me if we’re out in the evenings, and there have been a couple of times recently when I’ve managed to transfer him from sling to bed, via nappy change and pyjamas, without him waking up.

Arthur hasn’t really hit full on tantrum mode yet, but on the odd occasions when it looks like it might be approaching there is nothing more effective than holding him close in the sling. He might struggle a bit at first, but actually invariably cuddles are what he really wants and wearing him for a while will help him calm down and get back on top of those troublesome toddler emotions.

6) It’s made it so much easier to continue breastfeeding

If I’m honest, I’m not sure I’d still be breastfeeding Arthur as regularly as I am – if at all – if it weren’t for babywearing. I’m fully aware of all of the benefits of extended breastfeeding, but if I had to stop what I was doing every time he wanted a feed I reckon I would have started to think about weaning a while ago.

But the Connecta is brilliant for breastfeeding – comfortable, and utterly discreet. I don’t even think twice about feeding Arthur when he needs it, and he certainly seems to be pretty happy about that.

7) It’s a closeness that daddy can enjoy too

I know that I’m tremendously lucky to get to spend all of this time with this incredible little person, especially since a lot of that time is spent holding him close and benefitting from the magical little person cuddles. But I am also very glad that the fact Arthur loves to be worn means that my husband can also share in that wonderful closeness – often when we’re out and about at the weekends it’s Leigh who wears the baby, and it’s clear how much he and Arthur gain from that.

8) It gives us freedom

The first (and only) couple of times I took Arthur out in the pram I felt terribly self-conscious. I guess you must get used to it, but I just didn’t seem cut out for lugging this contraption around. There was one day, one of my first trips out after Leigh had gone back to work, when I walked into town with the intention of picking up a couple of bits, maybe grabbing a coffee. But the shop I wanted to go into had steps I’d never noticed before. And the coffee shop was busy – I really didn’t fancy negotiating my way around the chairs. So I gave up and went home,  resigned to not really going out much again.

But then we started babywearing, and we’ve never looked back. Whether it’s country walks or escalators, crowded pavements or steps down to a beach, music festivals or art galleries, it’s just so much easier with a sling.

And now that Arthur wants to spend at least half of his time when we’re out and about running around that’s even more true. I’m really not sure how people manage to keep one hand on the empty pram whilst chasing after the toddler. I know I couldn’t!

But with the sling it’s easy. If I need to get a move on, or we’re near a busy road, or he’s tired –  then there’s somewhere for Arthur to go. But when he wants to explore then I can clip the sling around my waist or slip it into my rucksack and I’m hands free again – ready for that all-important toddler chasing.

So there you have it. I could go on, but I’m sure it’s pretty clear by now: I really, really love wearing my toddler.

I’d love to hear about your experiences too if you’re a toddler-wearing mama – please share them in the comments below, and if you have any questions then I’ll do my best to answer them.