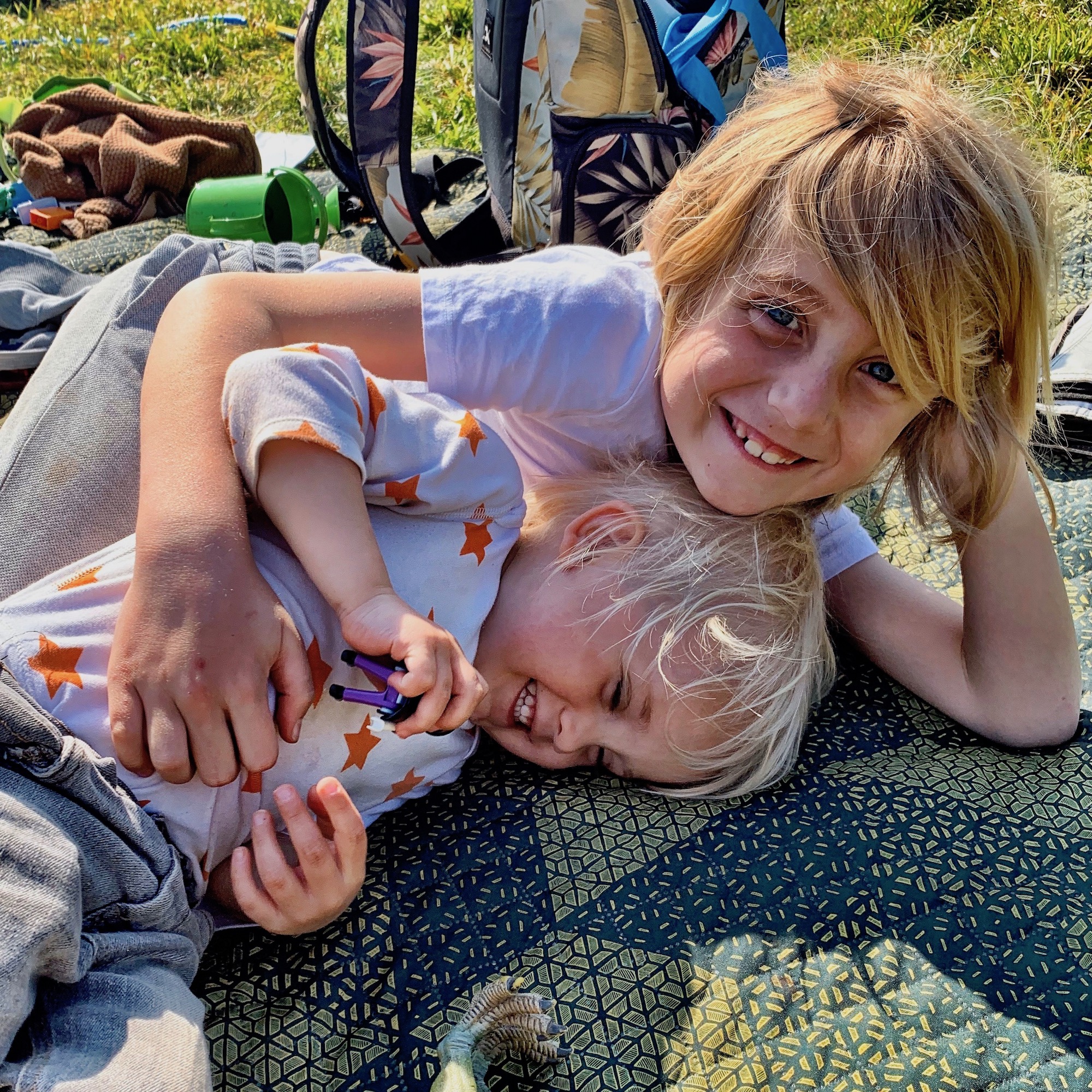 It has been four weeks now since the boys and I began this isolation journey.

The world has changed almost beyond recognition during that time, a change made up of billions of individual stories. I wanted to take a moment to record ours here: for posterity, and to help me make sense of it all.

We started self-isolating before the strict measures we’re living under now were introduced. The boys developed coughs and mild fevers, and though they were well in themselves we didn’t want to take any risks. At that point Leigh, an ED doctor, was still going to work in Exeter. Coronavirus was there on the periphery but its impact wasn’t really being felt. Still, when a few days later government guidance changed, he was signed off for a fortnight just in case he was harbouring the virus.

There was a sense of relief in the permission isolation gave us in those first couple of weeks. Permission to stop rushing around, to begin to tackle the mountain of jobs on the to do list, to spend time outside soaking up long-absent rays of sun. There was gratitude, too, for the space we have here. Our old house and large garden had begun to feel like a burden: always so much that needed doing, and just that little bit too removed from the home ed communities we so enjoyed spending time with. Suddenly though we saw all that we had been missing about this place, its massive potential to protect and nurture us. We decided that we would stay within its bounds as much as we possibly could: shared outdoor spaces are so precious now for those who do not have their own.

Most of our shopping is done online anyway, and combined with the remnants of last year’s veg patch and the bounty of foraging opportunities the change of seasons affords we have all we need without venturing to the supermarkets. I am hugely grateful for that: the world outside looks dystopian enough through my computer screen, and I am not ashamed to say that I would rather hide away from it whilst I can.

That screen, even more than usual, has been a blessing and a curse. I am trying to avoid relentless scrolling of news sites and social media, anxiety building as my brain whirrs, crunching figures and attempting to analyse government responses to it all, getting into arguments with strangers about the political implications every aspect of this crisis holds.

But I do not know what I would do without the connection the technology brings: zoom chats with loved ones and my invaluable peer support network, home ed meets brought into the virtual realm, singing and yoga with friends near and far.

Writing-wise, there has been a hunger for the perspective our family’s lifestyle has given us to the situation we all now find ourselves in. It has felt deeply rewarding to be able to share what I have learnt about educating children at home, and the implications for education more broadly – not just here on the blog but through local television news and my first podcast interview. The book I am working on suddenly seems more urgent than ever, and that urgency is spurring me on to take the steps I need to get it out into the world.

It does feel like in many ways we have inadvertently been preparing for a time such as this. The decision to prioritise our own outdoor space over proximity to others. The choice I made to step away from my teaching career to focus on writing and our childrens’ education. The work Leigh has done on his own mental health that means this time together as a family is full of love rather than the lingering threat of pent-up trauma.

There are many layers of privilege inherent in all of this of course. But rather than allowing that to make me feel guilty about what we have I am determined to use it the best way we can.

That has been part of the motivation behind throwing ourselves so wholeheartedly into our forest garden project over the past few weeks. It has been bubbling away for a while: a vision of a food forest on the patch of land behind our house, one that will provide for us and potentially our neighbours too whilst bringing much needed diversity to our local biosphere. We have spent months learning about permaculture, inspired by the principles it offers to remodel this world into something new. We had got as far as drawing plans and building up a little library of books to guide us in our vision, but before Coronavirus hit we had resigned ourselves to simply not having enough time this year to start making it a reality.

Turns out time is no longer in short supply. There was just enough to make an order of bare root trees before the season ended, and to get them in the ground in time to (hopefully) thrive. We have established an edible hedge – hazel, dog rose, elder, hawthorn, crab apple, oleaster, cherry plum, blackberry – supplemented with nitrogen fixers in the form of alder and sea buckthorn. Alongside this we have planted a small orchard – various varieties of apples, pears and plums, with blackcurrants, redcurrants, raspberries and gooseberries, building guilds with ground cover of green manure and patches of edible flowers to attract the bees. We are now in the process of building a swale – partly to help slow the flow of water down the gentle slope, partly to focus our planting of perennial vegetables on the hugelkultur-inspired raised bed. Also in progress are a play area and a fire pit: we are already looking forward to inviting friends and neighbours to join us here when all this is over.

It has been the perfect project to focus on during these strange times. It has helped us look to the future, and to put into a tangible form the shifts we want to see happen to make our time on this earth more sustainable, less reliant on the consumerist machine. There has been something incredibly enriching too about spending time together as a family focusing on a shared goal – one which involves hard physical work as well as learning, and which has taken us into the fresh air for hours at a time. The boys have dipped in and out of helping plant seeds or water saplings, but mostly they have just played. Hours and hours of play, together and alone.

I have seen significant changes in both boys over this past month. Things were challenging at first – they were both under the weather, and that combined with absorbing the general anxiety and change to their routines made them unpredictable: tempers flaring out of nowhere and a visceral need for connection both physically and emotionally. That has eased as they have settled into these new days, and they are both finding new rhythms.

Arthur has discovered a love of drawing which is wonderful to see. He has literally gone from barely ever picking up a pencil (and getting easily frustrated when he did) to finding a real joy in capturing his vision of the world on paper. He’s incorporated it into his imaginary play, drawing scenes from Dr Who and creating his own characters to share his days with. He misses his friends for sure. We’ve been catching up on video chats when we can, but it’s just not the same, especially when you’re seven. And whilst the bond between him and Orson is deepening there are some limitations to playing with a two year old.

Orson on the other hand is adoring spending so much time with his big brother. His communication skills, already pretty impressive before, have sky rocketed. And when he’s not engaging in play with Arthur he has developed the ability to create and sustain his own imaginary worlds: listening to his monologue as he develops narratives with his toys makes my heart sing.

In all honesty there are many moments that do: and then I stop and think about the dystopian backdrop to our staycation and it sobers me for a while. It is easy to forget when we’re immersed in making the most of this time at home how horrendously difficult life has become for so many. And it was always thus, of course – people have always been suffering. But there is much about the current situation that throws all of our differences of circumstance into sharp relief.

I hope (beyond hope) that we will emerge from this time with a collective desire not to return to the way things were before: to use this as a catalyst to make long overdue changes to our society – to what it values, and to how it nurtures and cares for the people within it.

For now, though, I will continue to focus fiercely on nurturing my little family. Things are about to shift again for us with Leigh’s return to work at the hospital next week. I am trying not to be scared for him – for all of us – but it is impossible to escape the fact that all the heartfelt clapping has yet to secure the funding and equipment our doctors need to protect themselves and their teams as they battle this pandemic.

We are beyond fortunate that home for us is a safe place, and that up until now we have been able to batten down the hatches and ride out the storm. I suspect we will need all the reserves we have built up to carry us through the weeks that are to come.

2 thoughts on “Life in the time of Corona”