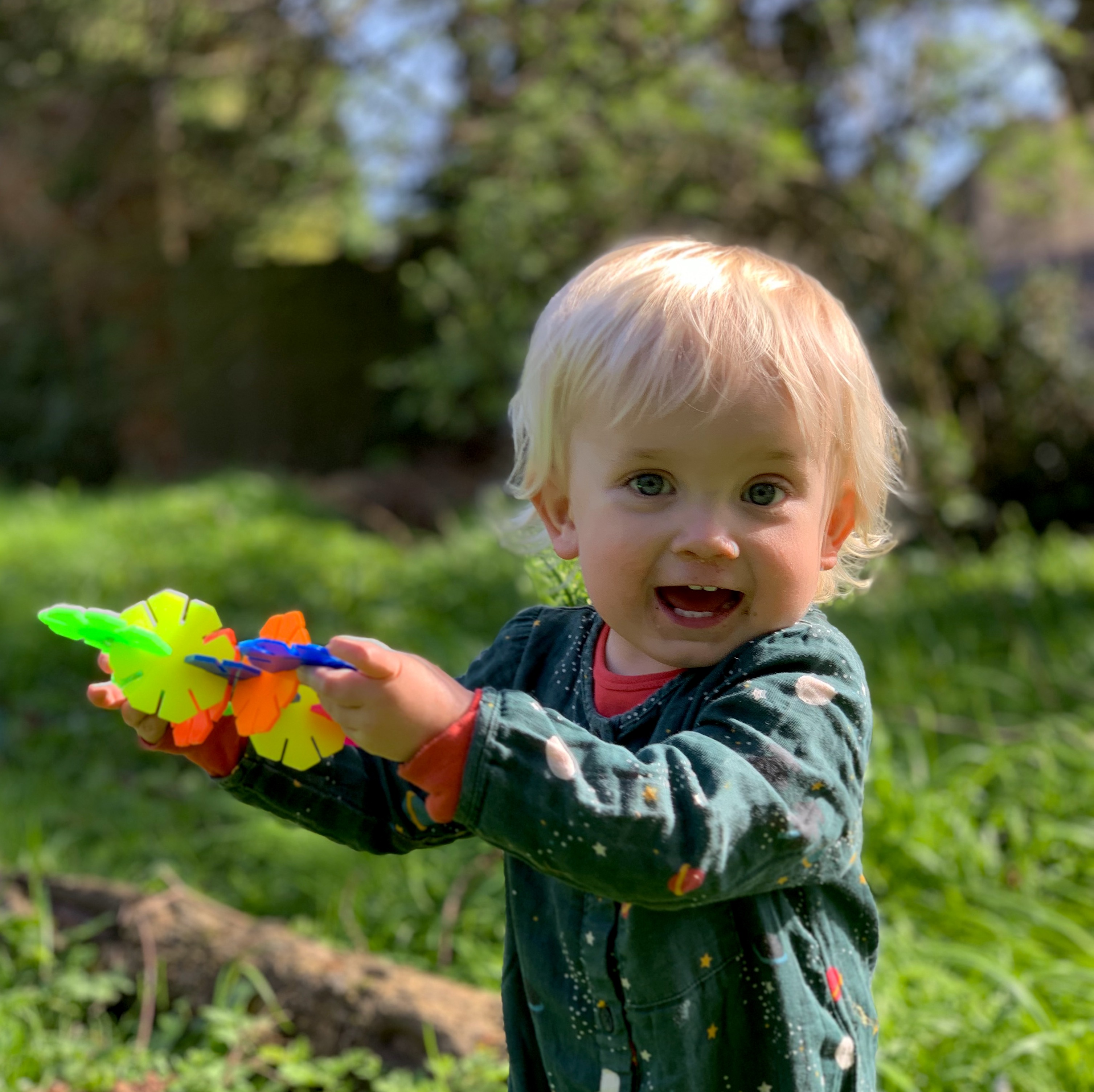 The past couple of months have brought with them an explosion in Orson’s communication skills. He has always been a pretty good communicator, through his cries and laughter, his cuddles and his facial expressions. His first foray into the world of words came last summer, but more recently his vocabulary – and his ability to use it – has really taken centre stage.

He has a pretty random selection to choose from at the moment. Our names of course – Mama, Daddy and Arthur. Then there’s a smattering of animals – chicken, cat, dog, bear. Others point to his emerging interests as he starts to find his place in the world – light, fire, star, moon; book, ball, car, train; water, crisps, banana, apple; up, down, door, there.

In between the words we can easily discern there’s a whole wealth of sounds that mean different things depending on the context. Even the words themselves, if I’m honest, mean more to us that I imagine they do to people who don’t know him so well – a particular inflection, intent conveyed with a look or a pointed finger. The glee that infuses his face when we get it right, when he manages to communicate what he wanted to, is one of those aspects of toddlerhood that I wish I could bottle and preserve forever – such pure satisfaction, a consolidation of his power.

Less so the frustration when we can’t understand what he’s trying to say, something which has been compounded this past week or so by his enthusiastic discovery of the word ‘no’. He’s trying it out whenever he can, sometimes he means it, other times not so much. I’m trying to respect his wishes as much as I can, particularly because we are currently having important conversations about consent with his older brother. Sometimes though, when he’s tired, he says no to everything. It’s hard to find a winner then, especially at the end of the day when I’m tired too.

I had forgotten quite how fascinating this whole process of language learning is though, and I’m recognising more clearly this time round I think the layers of understanding and leaps of development that are building up on top of each other with every passing day.

It’s making me think as well about how different this process would be if it wasn’t organic: if instead of just letting him feel his way into the world of words through trial and error, through his own keenly felt satisfaction and frustration, we tried to standardise it somehow. To decide which words should be the ones he uses first, and to encourage these whilst ignoring the ones he wants to say. To focus on the details of his pronunciation rather than use our adult skills to fill in the gaps, denying him the joy of successful communication for the sake of a lesson in how to say words ‘properly’. To aim to accelerate his learning by making him combine words together before he’s quite ready, perhaps forcing him to repeat them, parrot fashion, until it begins to sink in.

That might all sound a bit absurd when discussing the way a toddler learns to speak, but I wonder how we came to the decisions we did about the age when learning organically is not good enough? About the point at which it needs to be dictated by outside forces rather than self-directed by the child? About the moment when it needs to be monitored, assessed, corrected, to follow a curriculum, to meet age-based requirements of knowledge and skills?

It is particularly interesting for me to experience this explosion of words from my toddler alongside the literacy learning of my six year old.

Our decision to home educate, and particularly to follow an approach which is almost entirely child-led, means that Arthur’s journey deeper into the world of words has been rather different to the path he might have followed in school. For a start I know he is ‘behind’ his peers in many ways – he is really only just mastering the alphabet, just beginning to sound out simple words. His written letters are awkwardly formed, and he only rarely tries to put them together.

But he loves stories – loves words, generally. His vocabulary is expansive, and his understanding of the ways people use language is evident in his speech and in his response to what he hears. He’s a huge fan of puns, points out witheringly when I am being sarcastic, and is becoming an expert in constructing convincing arguments.

And just recently this has spontaneously spawned an interest in more fundamental literacy skills. I woke up one morning this week to a figure moving behind the curtains – when he pulled them back the misted window glass was full of letters, and the beginnings of some recognisable words. Yesterday he asked for a notebook because he wanted to write: he started with numbers, confidently forming 1 – 10, and then moved onto words. He spelled them out verbally (something he’s enjoyed doing for a couple of years) and then tried to write them down. This sparked conversations about the vagaries of the English language – why ‘to’ cannot be repeated to write ‘tutu’ for example, and how ‘k’ is so often silent. He was fascinated by the ways in which the marks on the page related to the words in his head, and we spent a good half an hour experimenting in that notebook, his letter forms swiftly becoming more clear. Sometimes they would come out backwards, and he was frustrated at first at their wrongness until I showed him their reflection in a mirror. I could almost hear his brain whirring as it all began to fall into place.

I don’t know when he will next be driven to write so much again, but I do know that these bursts of learning driven by curiosity are particularly powerful.

And despite wobbles in my confidence that come when I compare him with his schooled peers, I know he will come to master reading and writing when he wants or needs to – and after all there are many countries in the world where this formal literacy would not even become an expectation until after he turned seven.

I’m not sure I will ever cease to find it strange that we are so eager in the UK to pluck our children out of the world of exploratory, self-directed learning and force them into the strait jacket of attainment targets and assessments. I often wonder what incredible things our young people might achieve – or frankly just how much happier they might be – if they were able to take things at their own pace, to use their passions to drive their growth. Possibly the biggest advantage of home education for me is that we are able to do just this – and I hope that one day schools might find a way to do the same.