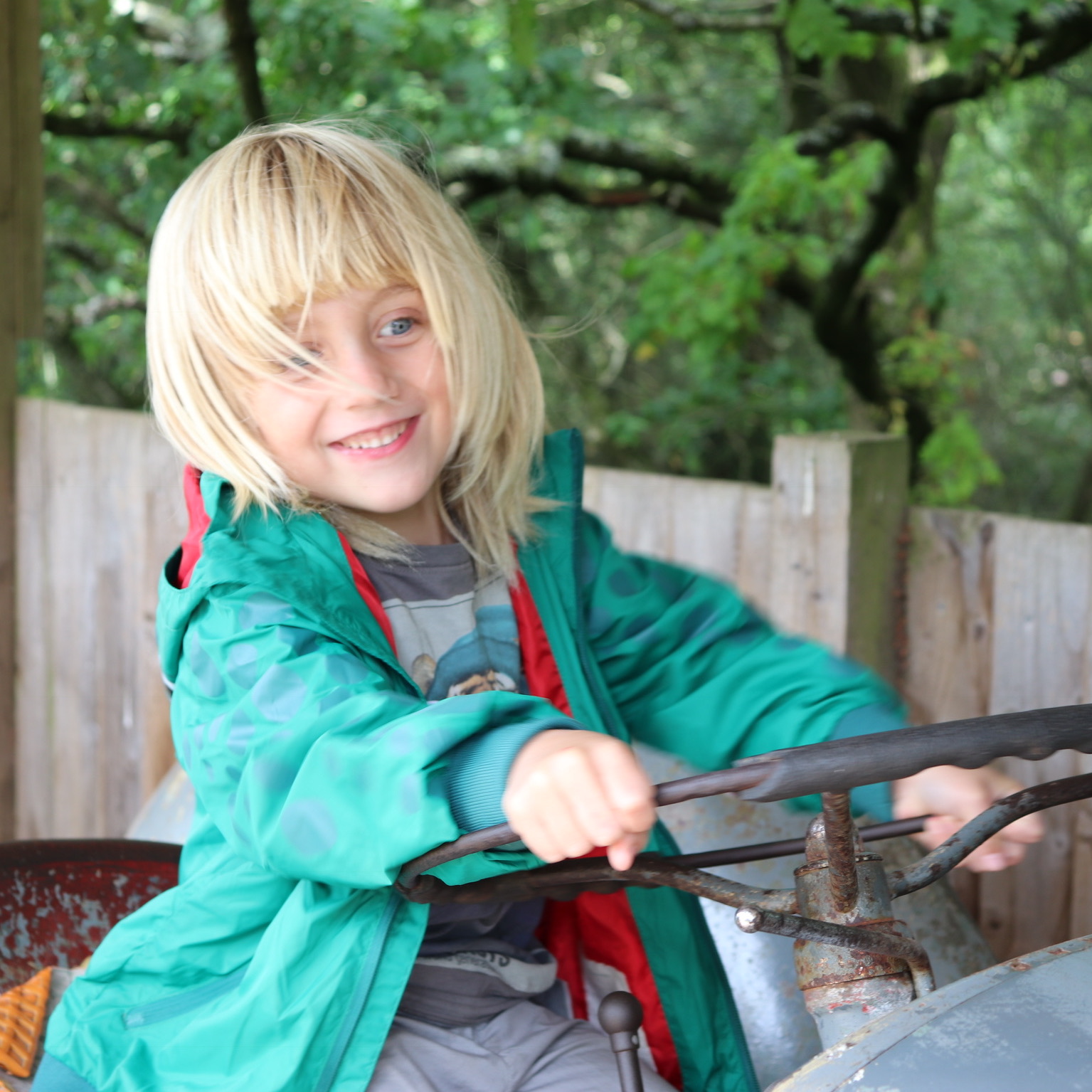 There are certain moments in the year when anxiety bubbles up inside me as I contemplate the decision to not send Arthur to school, and September is probably the peak of that. He would have been starting year one had we followed the well trodden path, and after a summer of juggling his needs alongside Orson’s I would have been enjoying hours of (relative) freedom to focus on my writing and the many related goals that are stacking up in the corners of my mind.

But we are not, and he didn’t.

And despite my nebulous worries that we are somehow doing him a disservice by not dressing him up in uniform and sending him off to do his learning in a classroom, as we come to the end of our second week of not back to school all that I feel is relief.

It’s been a whirlwind couple of weeks.

We have discovered a lovely new natural learning community, one Orson and I can enjoy with Arthur and where he can roam free in a gently held space with children of a range of ages and experiences, all in the magical surroundings of Embercombe. 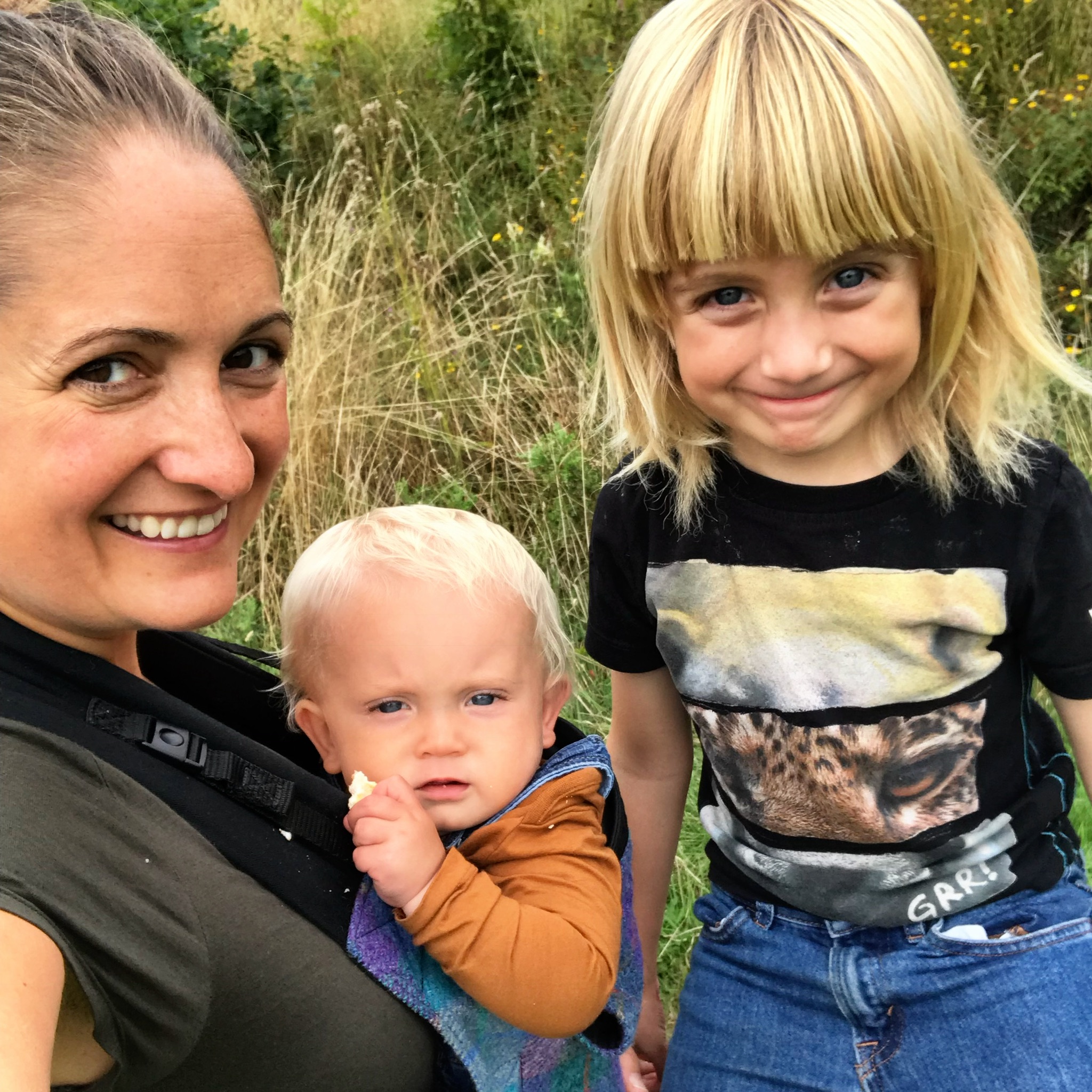 We have begun the process of building up our flock of chickens again after losing three to the fox. This took us to Totnes Rare Breeds Farm last week where we picked up three young Pekin hens. We took advantage of the almost deserted farm to have an explore too, free from the school holiday rush. Arthur loved bonding with the animals, showing a new gentleness and poise that I’d somehow missed in its development. 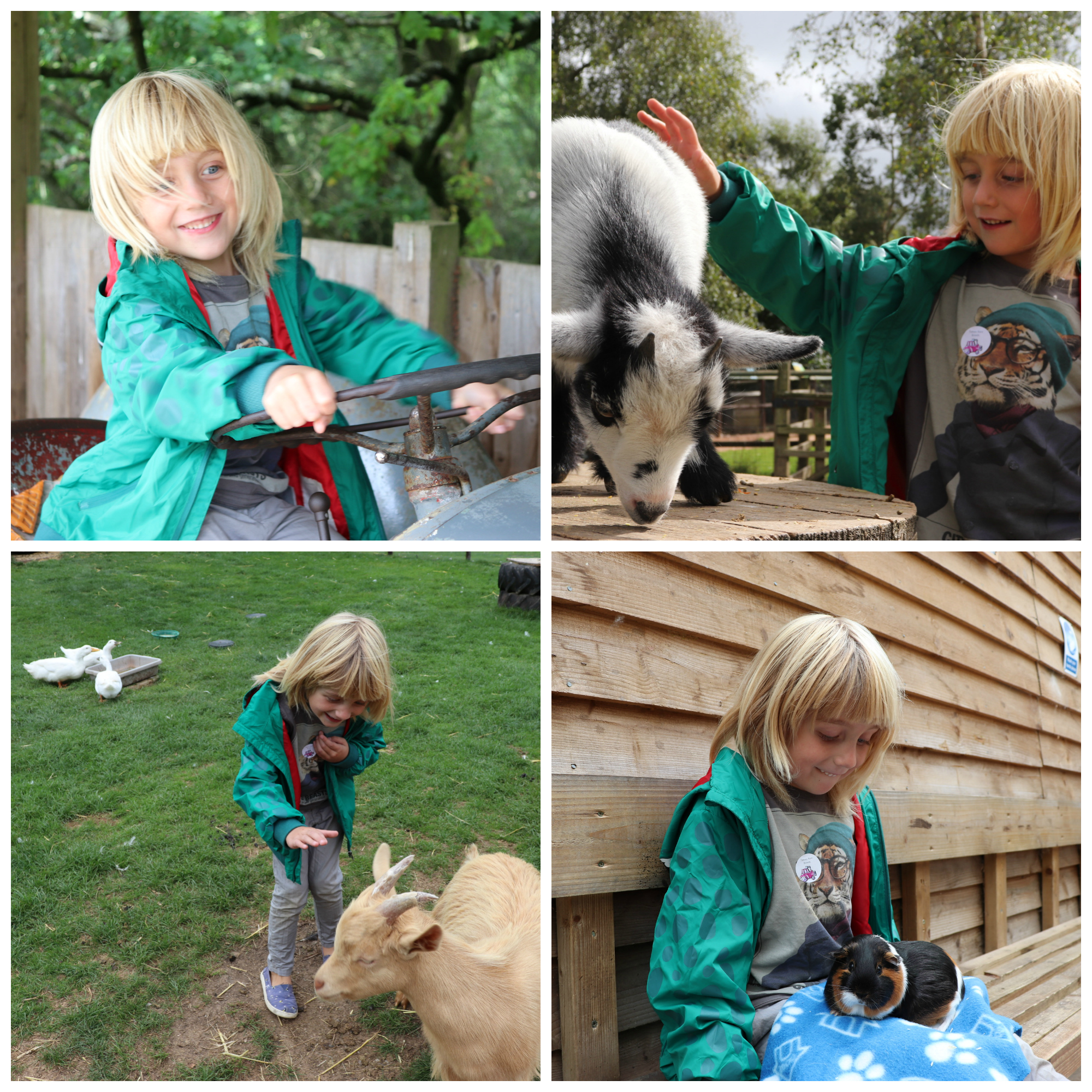 He really has grown up this year – we’ve spent so much time together that I barely noticed, but sitting late last night collating images for Orson’s first birthday book it was like looking at a different child. The ways in which his little brother has changed have been so dramatic that they almost blinded me to the equally huge transition from nearly five to nearly six. I am certainly sometimes guilty of focusing on the things he’s not (yet) doing rather than marvelling at the things he is.

When we got home from the farm, three little chickens in tow, Arthur used his new found confidence to become the perfect chicken whisperer. With Orson in the sling it was tricky for me to physically transfer the chicks to their new home, but Arthur gently moved them across, murmuring reassurances as he did so. The surviving chicken, Grace, did not take kindly to the new arrivals (as we had feared she may not). So he gently navigated a transfer for her too, to the cage where we could temporarily spoil her before reintroducing her to her new flock. That is still an ongoing process, one rich in learning and discovery. 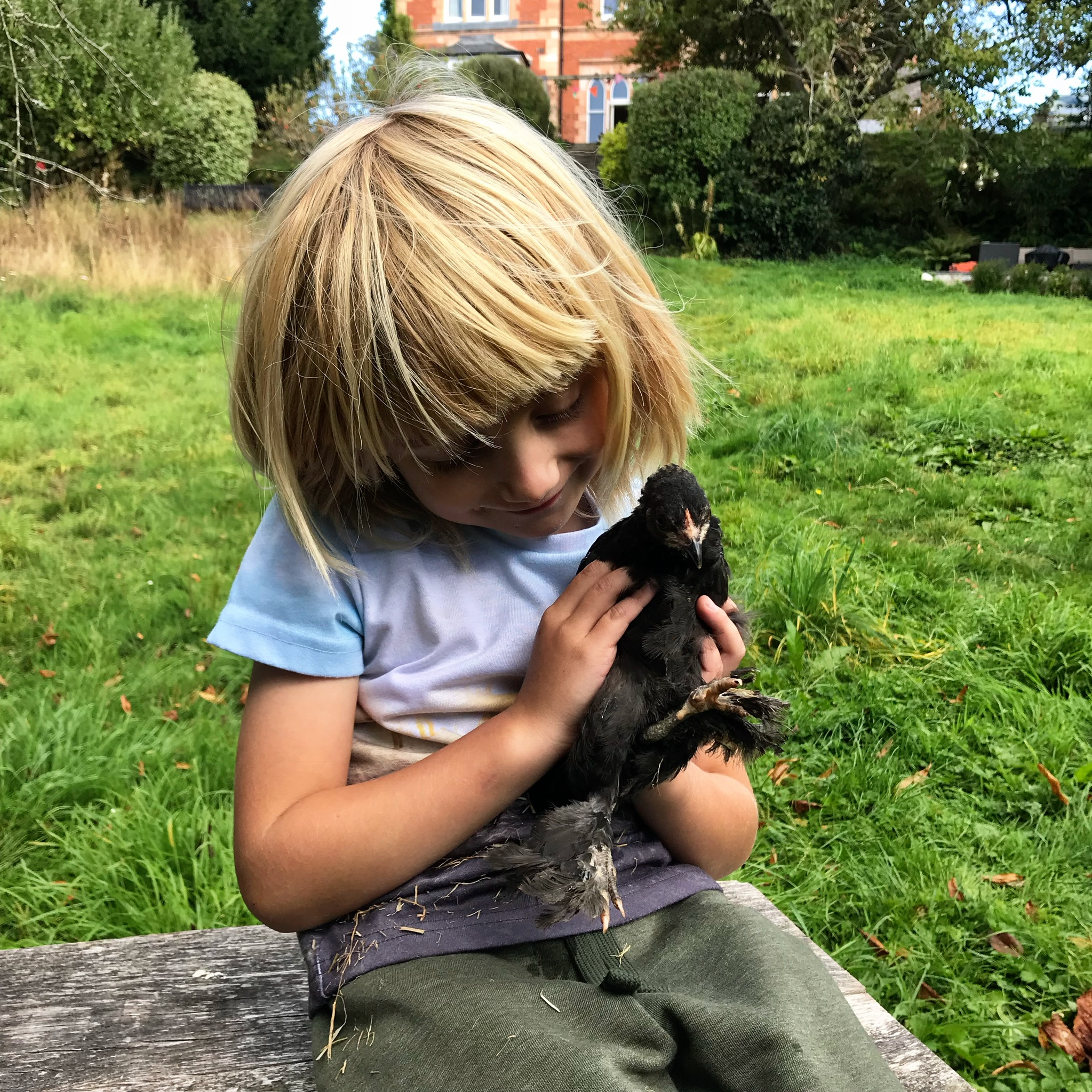 We have generally spent a lot of time in the garden this September so far. The weather has shifted and there’s a definite Autumnal chill in the air but it is still lovely to be outside. Our veg patch has exploded with life, and we are beginning regular harvests as well as contemplating a new wave of winter planting. 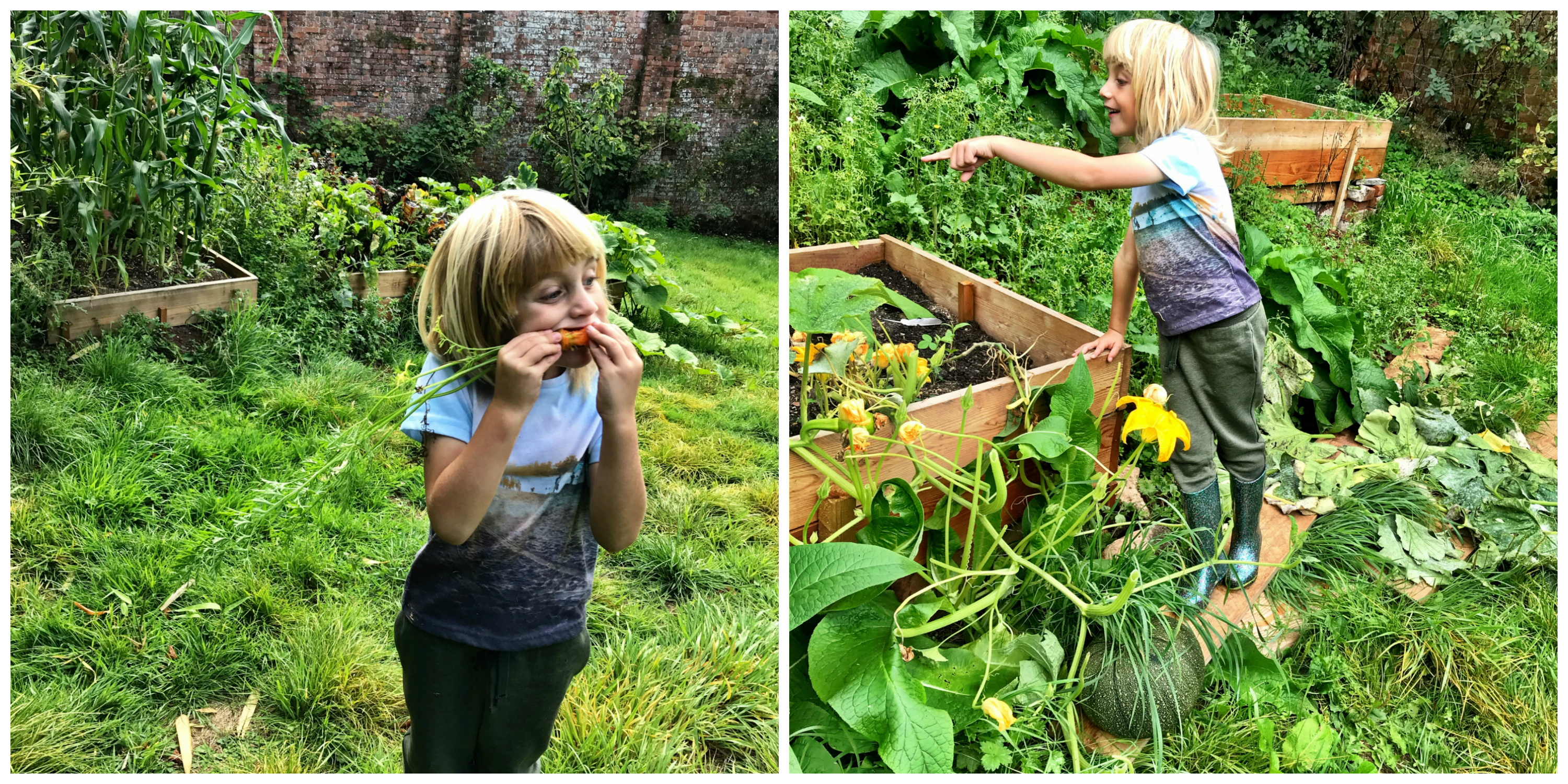 There has been much fun to be had in the playhouse too, Arthur’s sanctuary which Orson has encroached on rather sooner than we’d imagined with his impressive slide-climbing skills. Arthur doesn’t seem to mind too much though: he loves playing with his little brother, is still obsessed with making him laugh. 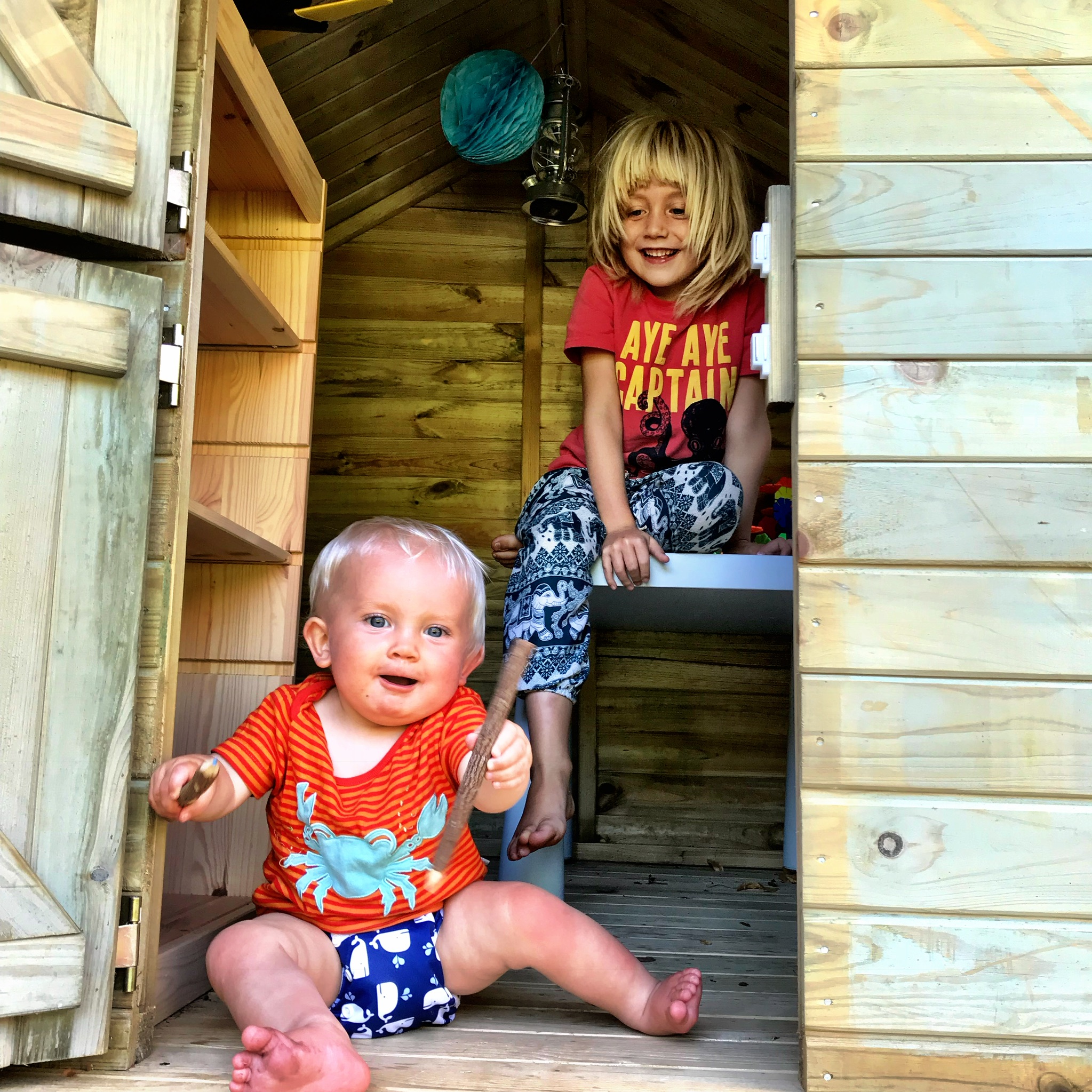 We have ventured as well to our local country park. There was one day last week where we’d got into a bit of a funk – too many jobs that needed doing, not enough presentness in anything. So I packed the boys into the car and we drove five minutes away from distractions where we could just be. Arthur took his bike – he’s had it for almost two years but loves his balance bike so much that he’s resisting the transition to pedals. He made a bit of a breakthrough though, discovering that he could balance on this bike too. I watched as he sped down hills, periodically swapping wheels for feet to run off and explore. 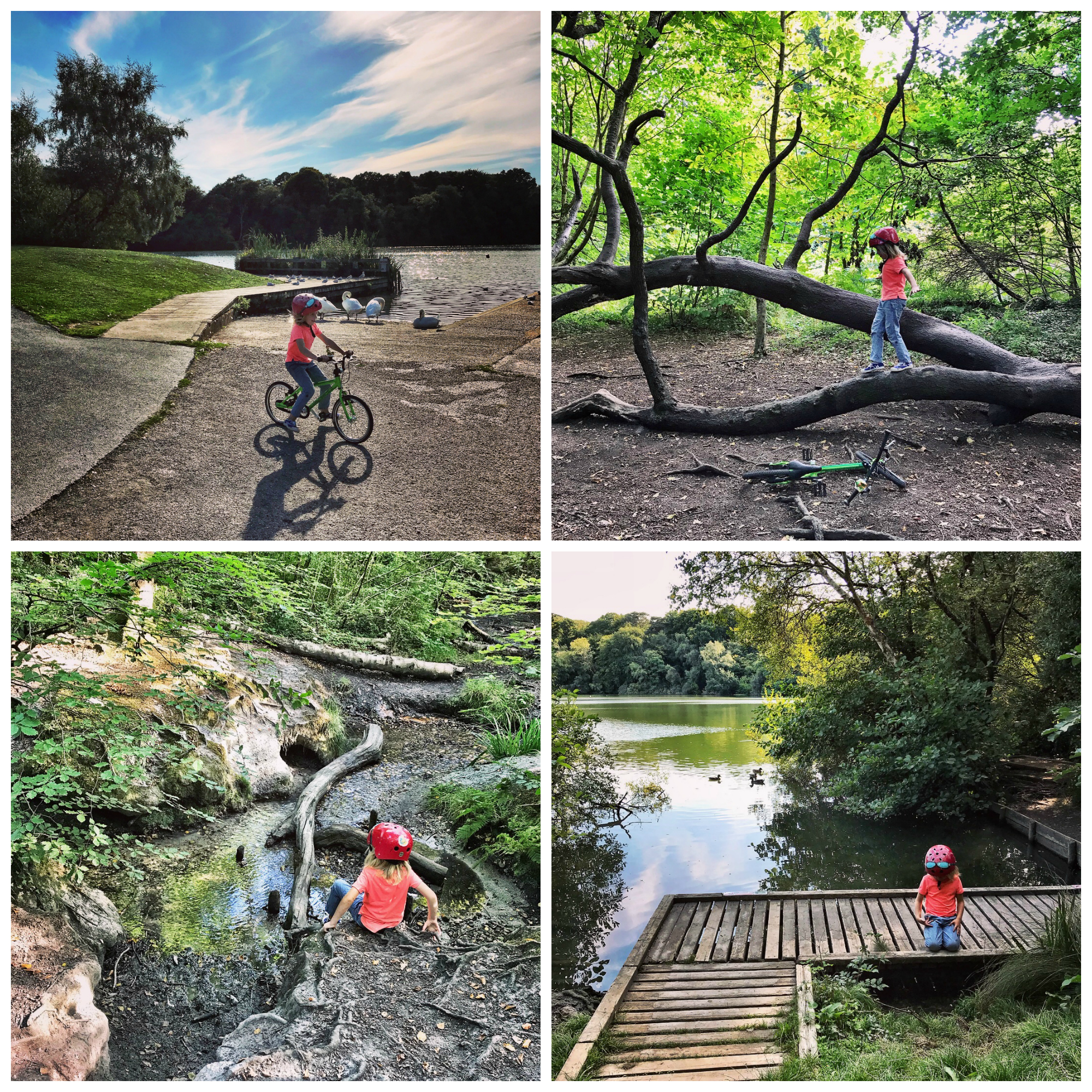 Back at home there’s been building, of course – lego and octons mainly, with various other materials brought in to bring shape to the ideas in Arthur’s imagination. There is always something in construction, structures up on surfaces out of Orson’s reach in almost every room. And Arthur’s own room is a sea of bricks to which he’ll retreat for a couple of hours each day before emerging with a new creation. 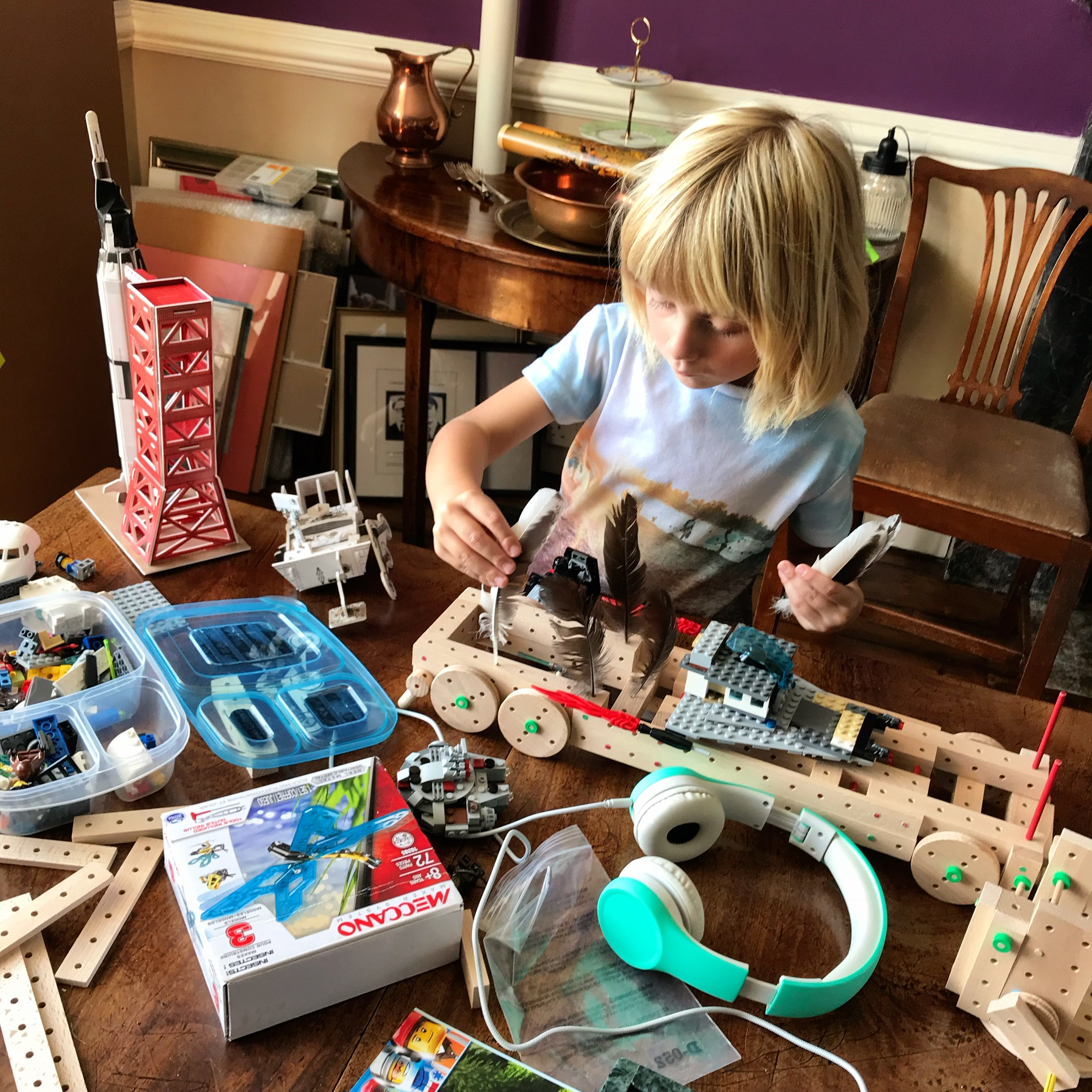 There has been a fair amount of screen time. I try not to feel guilty about that, though the rhetoric surrounding it is dripping with warnings. There’s no escaping the media in the world he’s growing up into, and there are many strands of literacy he needs to develop if he’s going to navigate it successfully. His most recent passion is a lego Star Wars game, discovering the thrill and satisfaction of passing through the levels as he picks up new strategies and skills. 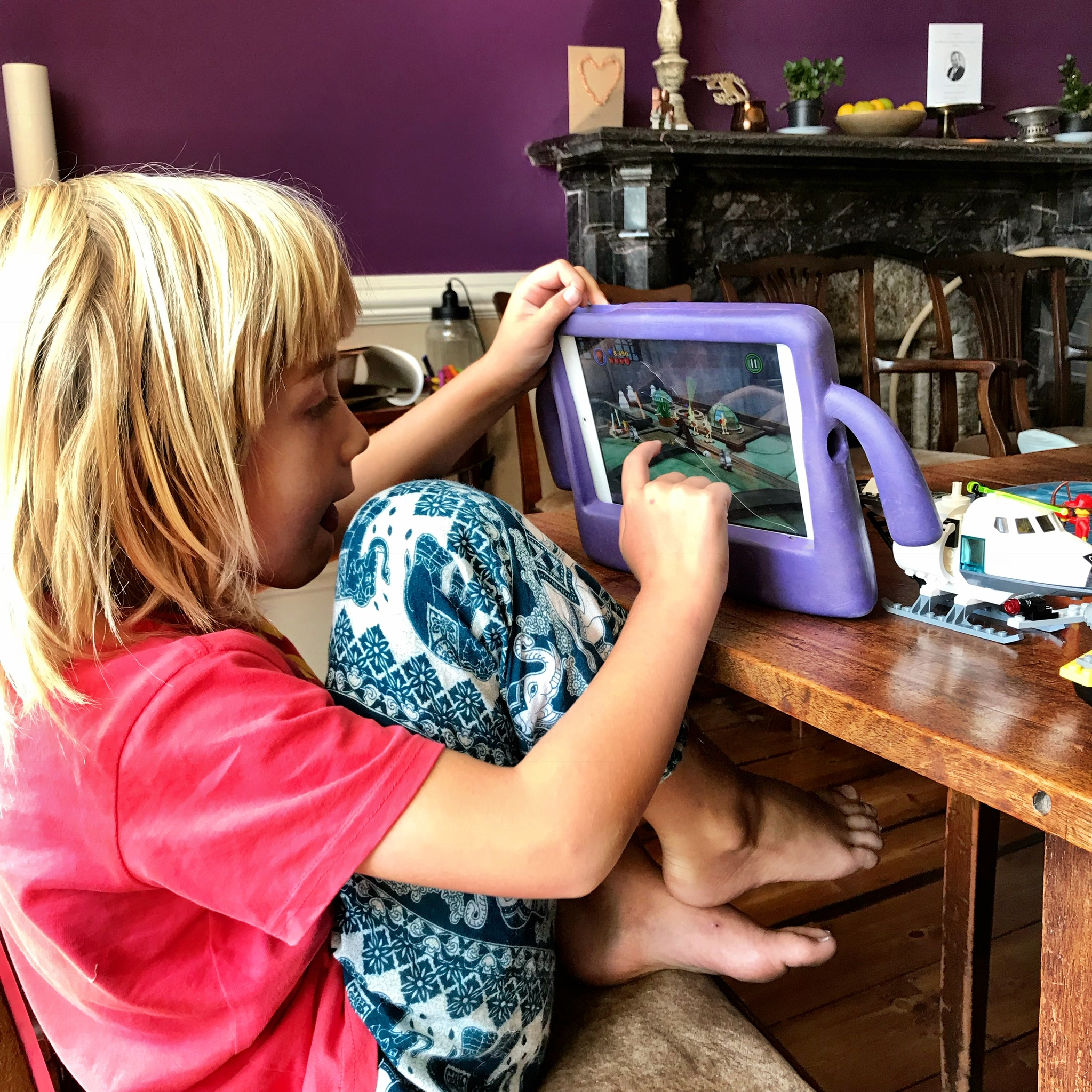 He still loves to watch movies too, and his current favourite is The Greatest Showman. He’s watched it twice so far, and we’ve listened to the soundtrack many times more. He is spellbound by the spectacle of the circus and the songs have found their way into his heart – he’s slowly working out the words and they burst out of his mouth several times a day as he’s pottering around the house (or scooting across a courtyard as he was last Sunday, belting out ‘A Million Dreams’ as my own heart burst). 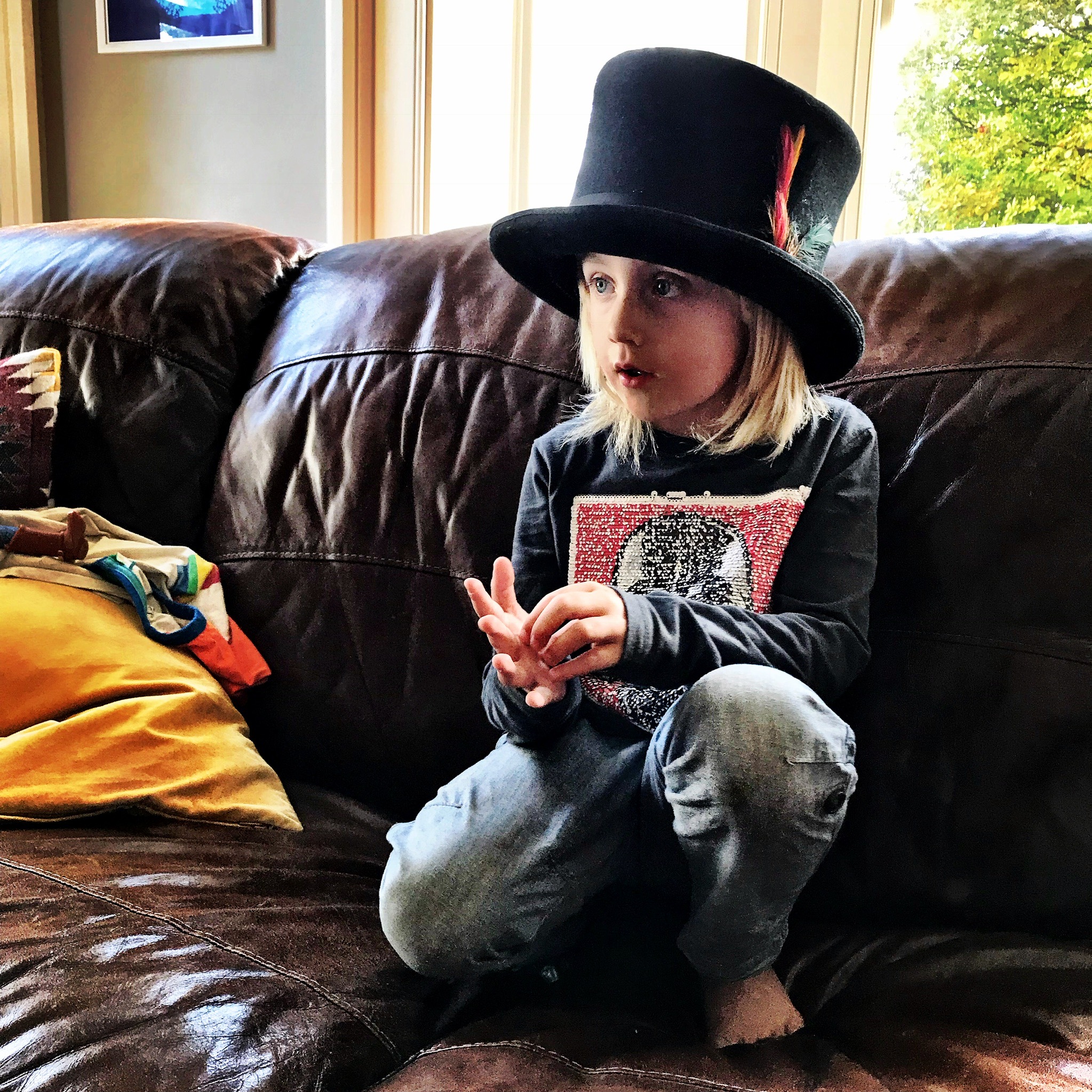 This interest in circus has brought with it a whole new enthusiasm to developing his gymnastics skills. He’s been bounding into his weekly class, and has been keen to practice at home too – something which I’m more than happy to encourage, especially when I get to join in with the fun! 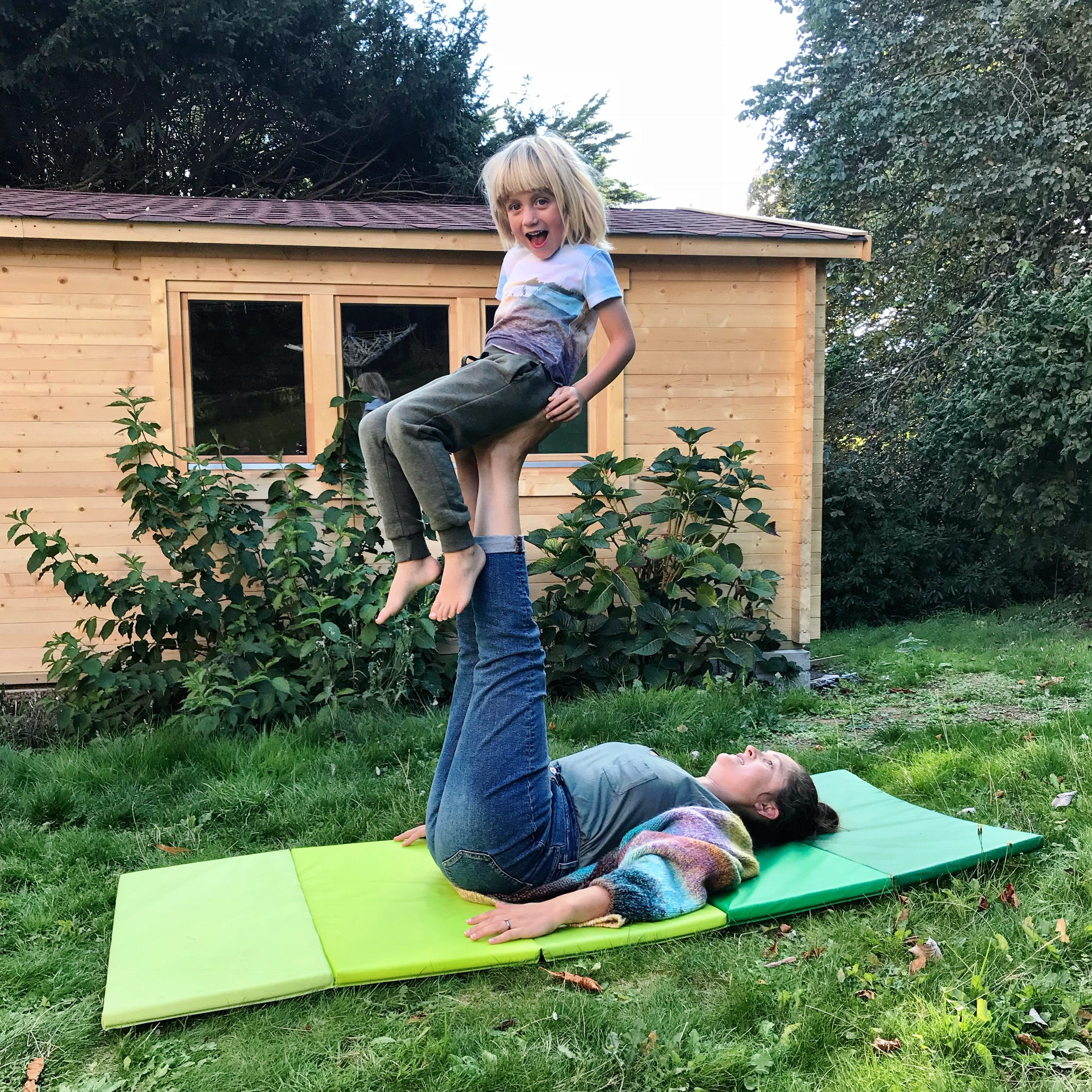 There is so much richness in our lives as a result of not going back to school. And still so much potential for ways to spend our days! There are so many other groups I’m keen to try together, and we’re trialling a new group Arthur can access independently too, one set up for homeschoolers around Montessori principles.

I was worried he might be missing out on things, but I’m not sure Arthur’s life could be much fuller than it is right now. He is learning so much every single day – and more important than that he is happy, and he is free. I cannot wait to see what this year holds, and all the very many ways he will continue to grow. 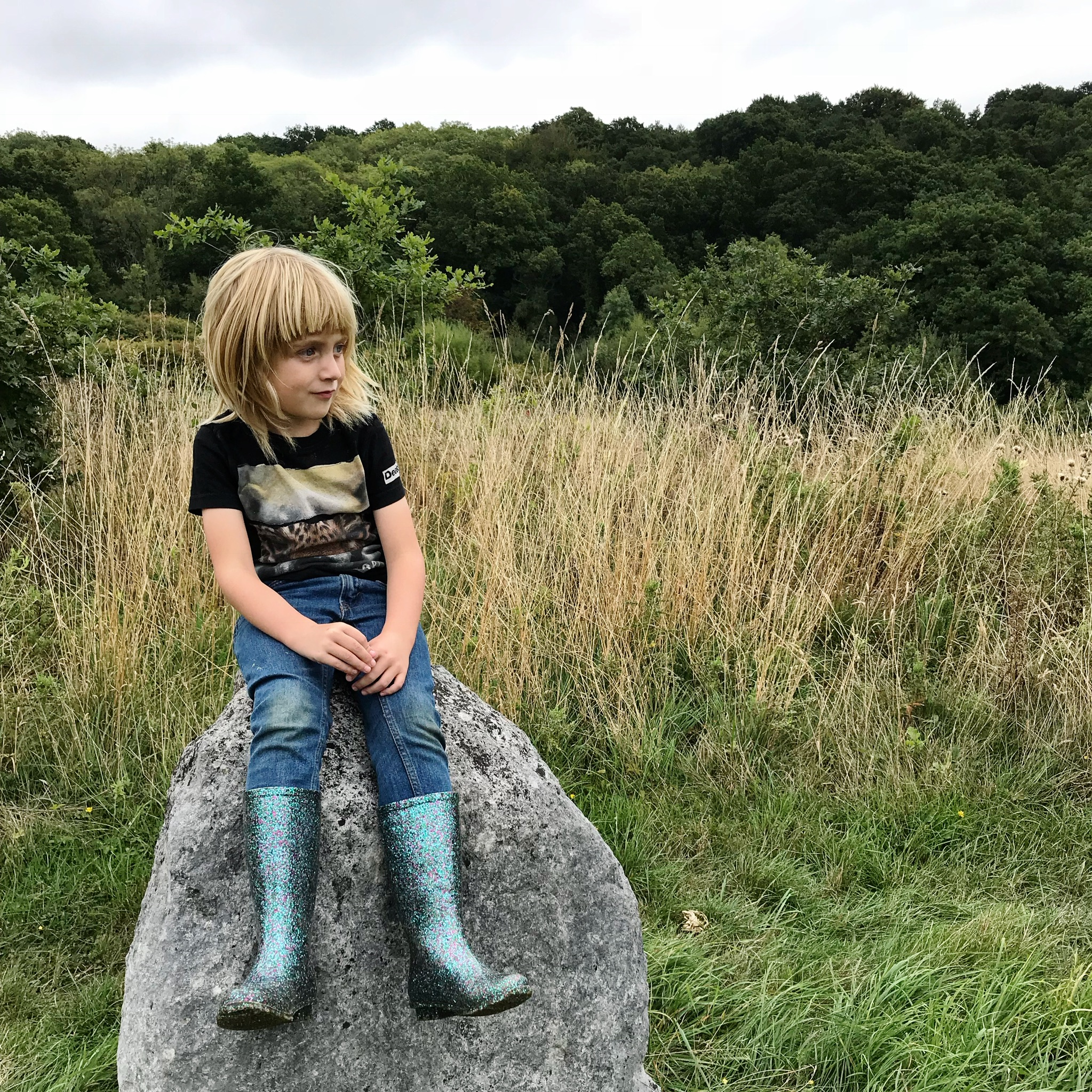 2 thoughts on “Not back to school”