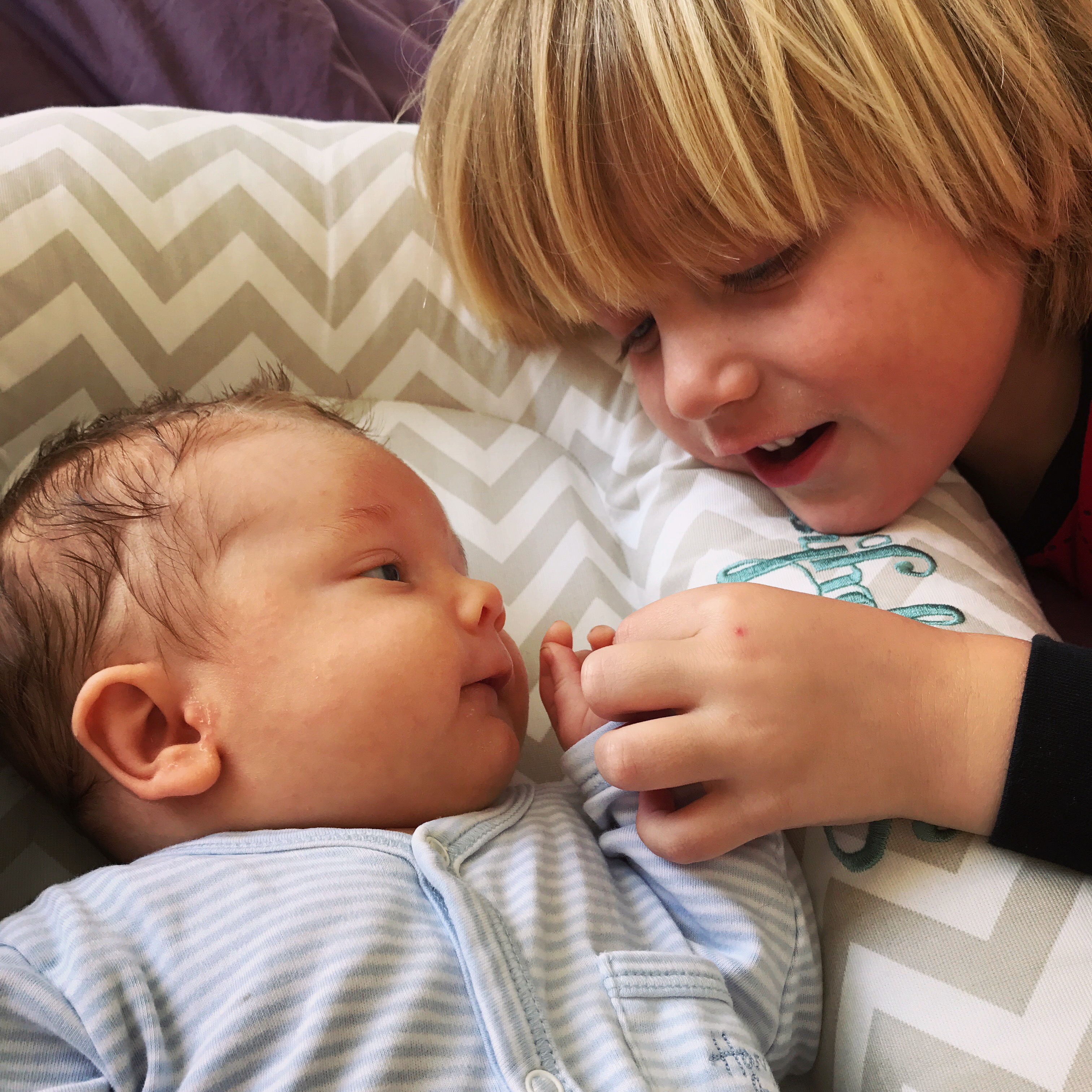 I wanted to thank you.

Since your brother was born, a month early, just over nine weeks ago, I have come to realise just how much I have learnt from you.

When he was tiny, in and out of the incubator in SCBU, everyone was struck by his calmness. He did not seem to need to be held – not like you did when you first arrived. Even when his eyes could barely focus he kept them open with a quiet watchfulness, strangely self-sufficient in his helplessness.

If he had been the baby who had first made me a mother I wonder if I would have evolved in quite the way I have.

It would have been tempting to let him be, to relish in the opportunity for rest, to take up the offers of the staff to watch him in the nursery whilst I caught up on sleep. But because of you I knew how powerful touch could be, how holding him would strengthen his body, too early in the outside world, and would rekindle in me the resilience needed to mother a newborn. And so I held him whenever I could. And though he did not cry out he seemed so grateful to not be alone in this strange land of plastic and wires and needles, and the thought that I might have missed that need in him knocked the wind out of me.

We were in hospital for almost two weeks, and you came to visit every day, smiling through your own fear of doctors and the strange smells and sounds that echoed through the ward. You wanted me home, but you knew your baby brother needed me. You loved him so much, right from the start.

And as I held him my love for him grew, carving out new space in my chest that was disproportionate to the size of the little bundle in my arms. He still rarely cried – could be laid down on his own without complaining, a novelty to me after your newborn days. But still in his silence I heard the need for connection, and felt his body soften and relax as I picked him up and put him in the sling.

It had taken me until you were five weeks old to navigate my way to wearing you in a stretchy wrap; before then you had barely let me move off the sofa. I relished those hours and days, but babywearing liberated me. I am so grateful to you for leading me through that particular journey so that, when your brother came along, wearing him was second nature. I think he needed it – we needed it – even more than you and I had five years ago. He just hadn’t worked out how to ask for it yet.

I began to learn the language of his snuffles and squeaks, and as I did he began to find a louder voice: growing in confidence in the ways of the world and in the certainty that someone would hold him if he cried.

There have been days (and nights) since when I have been unable to put him down without those cries rising up in protest. It has been – it is – exhausting, but again I have looked to you and have found solace in the fact that this will pass. It will pass all too quickly. I look at you now, my nearly five year old who, each night after story time, plays until his imagination is exhausted and switches off his own light and tucks himself into bed, and it is almost impossible to believe you were ever a tiny baby who would sleep nowhere but on my chest, or a two year old who still slept alongside us and woke every three hours for feeds.

I don’t know exactly what path your brother will lead us on, but I do know that as he grows he will step incrementally away from me.

I can only hope that as he does he finds the same sense of himself that you have secured in spades. I am so proud of who you are becoming – who you have become. Not just for yourself, but for us too.

The way you dash into our room in the morning to see if your brother has opened his eyes, holding out a finger for his hand to curl around or stroking his temple so very gently it almost makes me cry. The way you ask what you can do to help when you see me struggling, running to get the thing I’ve forgotten downstairs or helping yourself to snacks when I’m stuck with a hungry baby at my breast and am late fixing your lunch (again).

I have watched you blossom this past nine weeks, rising to the challenge of brotherhood more adeptly than I could ever have dreamed you would.

So thank you for that, too.

Thank you for being you.

2 thoughts on “To my first born child”