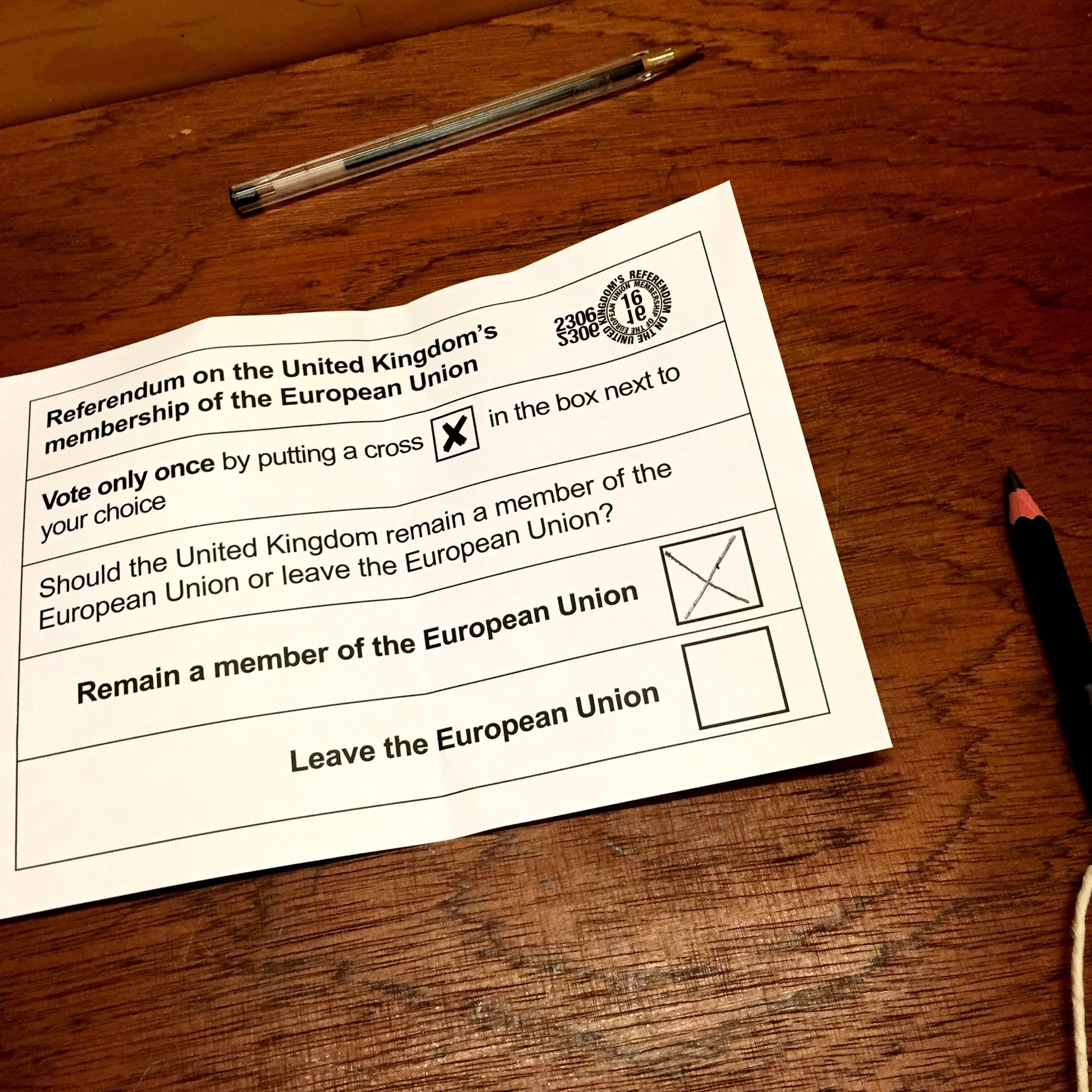 Today I took Arthur to vote for the fourth time in his three and a half years. The most recent was only a few weeks ago – another referendum, then on the mayoral system in Torbay. It was clearly fresh in his mind as we walked down to the town hall today as when I told him we were going to vote he said “We’re going to vote? Again?”

He wanted to mark the cross on the ballot paper. I couldn’t quite bring myself to delegate that task to him – not yet – but it made me smile that he was so keen.

He’s starting to learn what it’s all about. He has a head start, I guess, having a mum on the local council. Last Spring he spent hours with me delivering leaflets around the streets of our small town, and he has been to a fair few council meetings since, generally letting the talk wash over him but still with a creeping awareness that this is how decisions are made: that people get together, and they talk, and they work out the best way forward.

We’ve talked about the national picture too – he knows when conversation between me and Leigh is heating up politically, and he always asks shat it is we’re talking about. And we try to explain, as simply as we can, why we feel so strongly about the things going on in the world around us.

It is vital, I think, that our children are aware of – and engaged in – the democratic process. When I have wobbles about not sending Arthur off to preschool it’s one of the big selling points for the life we have chosen: he may not yet fully understand it all, but this immersion in the workings of our society is definitely seeping into his psyche.

After we voted today, we sat with our coffee and croissant in our favourite local cafe and the mood was reflective. I could swear there was a part of his mind that was pondering the impact that all of this would have on his future. Maybe not quite consciously, but still there was a sense of the importance of what we had done.

I may be reading too much into it, but whether Arthur is starting to get the hang of this whole democracy business or not it is him – and all of our children – that this is all about. I felt this more keenly with the EU referendum than with any of the other votes he has cast with me.

If the people of the UK have chosen to Leave the EU (I am nervously watching the first results roll in as I write this and they are not looking good), then it is likely to have a dramatic impact on the life that my son will lead. We will have choices to make, as a family, about where we want to live: I am not convinced that a post-EU UK will be a good fit for any of us. Even if the vote leans towards Remain the months and years ahead are going to be difficult. So much fear and xenophobia has been stirred up by this divisive campaign that I worry about the tensions that will embed themselves if people feel that their voices have not been heard.

Whatever lies ahead, though, I want Arthur to be entering into it as informed as he possibly can be, and with a sense that he has an important part to play in deciding his future and the future of his country.

Amongst the many, many articles that I have read over the past week, there is one that stood out and made me fear for that future. It was the story of a woman whose son had come home from a school assembly about the referendum and told her that she should vote Remain. The details of what had led him to think that are open to debate and somewhat immaterial, but her reaction floored me. She was ‘disgusted’ that her eight year old child had been exposed to discussion about this political event, indeed about politics in general – in her own words she said:

I was so shocked because I have never voted in my life and I keep that stuff away from the kids.

I’m not advocating schools (or anyone) politically brainwashing kids, but I’m pretty sure that wasn’t the issue here. What this woman seems to have taken umbrage with is the very notion that her son should be educated about the politics that underpins every single aspect of his life – and that is intrinsically linked with her own complete disengagement from the democratic process.

One of the most compelling arguments I have heard from Leave campaigners surrounds the undemocratic nature of the EU. That in itself is open for debate, but is surely a moot point if even within the UK people are opting out of democracy.

Our young people need to understand how the decisions made by different tiers of government impact on their lives – and in order to be able to do that they need to be invited to consider and discuss the choices and challenges we are facing.

I am looking forward to seeing how my continued discussion with Arthur unfolds. I do hope, though, that it’s against the backdrop of unity rather than division.