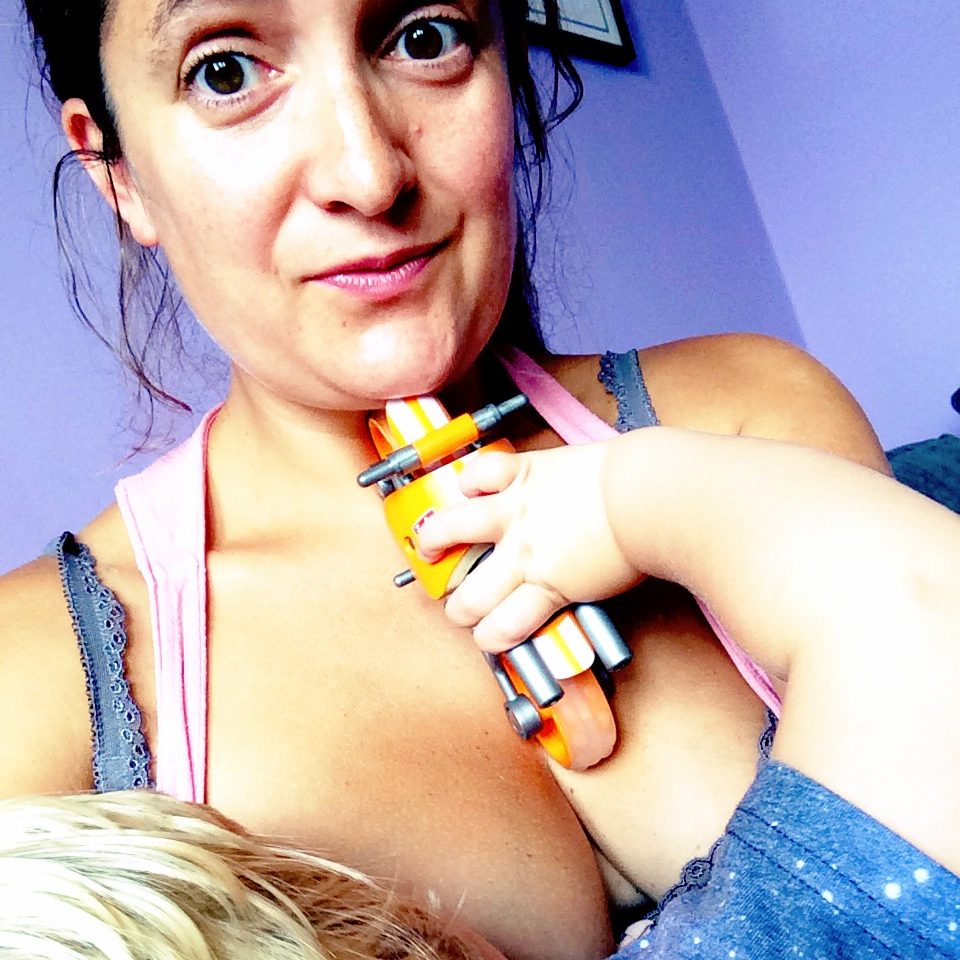 If you had asked me at the beginning of my breastfeeding journey if I’d still be nursing my son at nearly 21 months I would have said no. No way. I mean, I had nothing against the idea of breastfeeding an older child theoretically – I wasn’t freaked out by it like so many readers of this article seem to be (I know, I know – never read the comments on the Daily Mail). I was just pretty certain that by the time my tiny baby had grown into a toddler our breastfeeding days would be long gone.

But like so many things about this parenting lark, I was wrong.

It’s not like I’ve made a conscious decision to keep feeding him, but rather that there just doesn’t seem to be any reason to stop. We’ve got our technique down pat now and there’s not much I can’t do whilst he’s feeding in the sling. He’s feeding right now – dozing in and out of consciousness as I tap away at the keyboard. I’ll certainly miss the time it gives me when he can be close and nurtured and safe whilst I can still get on and write. If all goes to plan our breastfeeding relationship will have seen me through at least two novels by the time he stops which can’t be bad!

There are of course many benefits for him as well. I mean, he loves his booba. He asks for ‘booba feed’ when he just wants a quick snack, or ‘booba bed’ when he’s ready to sleep, and when I say yes he bubbles over with glee. He’s even starting to express an opinion about which one he’d prefer, though I’m not sure I’m going to encourage that…

I do think it’s still an important part of his diet too. He eats well, don’t get me wrong – he’s had porridge and banana for breakfast today, followed by mackerel and poached egg and kale for lunch. But he’s growing so fast – both in body and mind – that I’m not surprised he needs the extra calories.

But there’s more to it than that. It comforts him, in this world which is more full of wonder every day. It gives him pause, time to reflect and recharge. It reminds him that I am here, and I am his, and gives him the confidence he needs to embrace all the new experiences that are presented to him. If he is sick, or falls and scrapes his knee or bumps his head, then a bit of booba is better than any medicine.

My milk helps to warm him up when he comes smiling out of the Devon sea, and when we were in Barcelona this summer, traipsing round the city in the scorching August sun, my milk stopped him from becoming dehydrated. Of course he drank water too, but the nutrients in the breastmilk did a far better job of reviving him. He’s not interested in drinking anything else – we’ve tried watered down juice and other kinds of milk but he won’t touch them – which is one of the many reasons I know he’s not ready to stop quite yet.

It’s not all plain sailing. There are moments when he calls out for booba or puts his hand down my top in public when I feel like I need to make excuses for the fact I’m still feeding him, though if anyone else were to actually challenge me on it they would most certainly feel my wrath. It can get exhausting, and I do sometimes wish he fed a little less frequently. We’re essentially working on the principle of ‘don’t offer, don’t refuse’, but he still rarely goes for more than four hours without asking. It’s not that I can’t say no – and sometimes I do – but that doesn’t sit very comfortably with me. There’s plenty else I put my foot down on, but not this.

Though I may need to break through that soon for the sake of both our sleep. Nights are hard at the moment: he’d dropped down to waking me for one or two short feeds which was totally manageable with the co-sleeping. But in the last few weeks it’s been almost like having a newborn again – last night he woke up almost every hour, scrabbling for me and crying bitterly if I tried to soothe him in any other way. I thought for a while it was maybe just backlash over the lack of routine we fell into over the summer, but having done some research it seems this is a fairly common ‘thing’ for the breastfeeding toddler. So we’re looking into gentle methods of night weaning him. There are lots of techniques out there which I think we could handle, but it’s one thing rationalising them in the light of day and quite another negotiating with an angry toddler at three in the morning. I’ll let you know how it goes.

And as for weaning entirely? Well I think now that’s up to Arthur. I’m certainly not about to deprive him of something he loves so much, especially as both of us will be losing out when our breastfeeding relationship is finally over. And really, for all of his confidence and agility and words, he’s still my baby. He’ll stop when he’s ready, and only when he’s ready will it be time to stop.